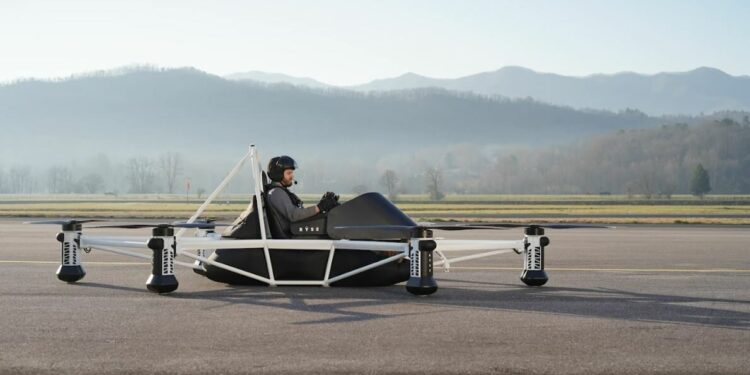 
By this time next year, farmers and ranchers could be up in the sky, getting a bird’s-eye view of their crops and grazing livestock. What won’t be required before they lift off the ground, however, is a pilot certificate.

That’s according to Ohio-based Ryse Aero Tech, which recently conducted the first crewed flight of its Recon ultralight electric vertical takeoff and landing vehicle (eVTOL) designed for agricultural and rural use.

In an increasingly crowded emerging eVTOL market, the Recon stands out, according to Ryse Aero Tech. The single-seat aircraft weighs less than 300 pounds, and its six carbon fiber proprotors are designed to reach a maximum altitude of 700 feet at a cruising speed of up to 35 knots, or 40 mph. The aircraft is controlled by a joystick and an integrated removable tablet PC with redundant controls.

Recon is as easy to operate as an all-terrain vehicle, which means anyone can fly it, the company says. Because of its lightweight design, the aircraft qualifies as a powered ultralight and therefore doesn’t require a pilot certificate.

Ryse began testing the Recon in Cincinnati, during a series of crewed flights in late July.

“It was effortless and very enjoyable to fly,” Erik Stephansen, Ryse’s director of regulatory affairs and aeronautics, said in a statement. “I was thrilled at how I could literally hover, take my hands off the controls and the Recon sat there stable and safe.”

The flight tests marked a step forward toward accomplishing the company’s mission of providing “an accessible aircraft to people with a purpose and make flight accessible to all,” Mick Kowitz, CEO of Ryse Aero Tech, said in a statement. “We proved today that this vehicle is reliable, stable, and enjoyable, but most importantly, it’s safe.”

Ryse said it will be exhibiting the Recon later this month in Boone, Iowa, at the Farm Progress Show, which is described as “the nation’s largest outdoor farm event.” The company also said it is on track to begin deliveries of the Recon by mid-2023.

The Recon isn’t the only ultralight eVTOL headed to market that won’t require a pilot certificate to fly. Earlier this year, Lift Aircraft inked a contract with the U.S. Air Force to develop its single-seat ultralight eVTOL, Hexa.

Like Ryse, Lift Aircraft says its 18-proprotor, amphibious eVTOL will operate under the FAA’s powered ultralight classification in FAR Part 103. Last month, the Air Force completed a 10-minute flight test of the Hexa, which the service said was a step toward incorporating the aircraft into military operations.

There’s A Flying Car In The CES2023 Parking Lot

Why every 5th electric car owner returns to gasoline