There’s A Flying Car In The CES2023 Parking Lot 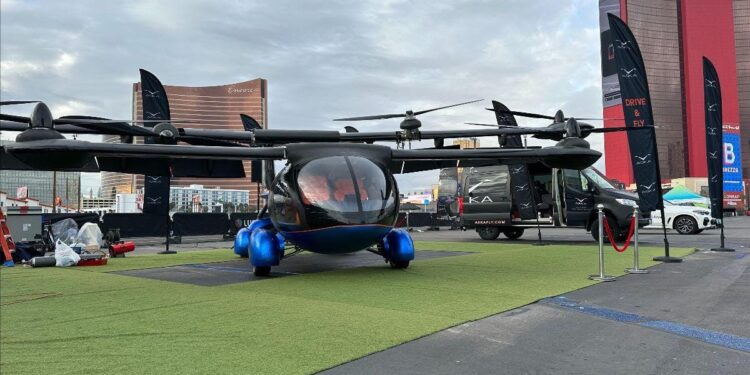 
Where are the flying cars we were promised?

That was the tagline of an irresistible invitation to a 2023 Consumer Electronics Show (CES) press conference. It came with a mock-up image of a futuristic flying car. It promised a working, full-size transforming prototype of “the world’s first electric vehicle that you can drive on the road like a car and fly in the air like a quadcopter.”

The promise was that ASKA (a Silicon Valley company based in Los Altos, CA) would, on January 4, 2023, unveil its full size, fully functional, transforming (car to plane and back again) eVTOL prototype. But the CES press conference was cancelled.

ASKA sources said a trucking incident slightly damaged the aircraft and delayed its arrival. The aircraft did eventually arrive but landed in a hard-to-find area of the CES parking lot. Adding insult to injury, a cold rain probably kept many visitors away.

But I’m a sucker for flying cars, the dreamers who create them, and the 80-year struggle to make them real. I’ve written about them for Forbes here, here,and here. Big companies like Hyundai, NEC, Bell, Embraer, and Uber, as well as startup dreamers, have been involved in the eVTOL (Electric Vertical Takeo-Off and Landing) “movement.” And there is no better place to see them than CES, where engineer’s dreams from Star Trek-like phones to giant flat TVs and high-resolution video, even in space, have come true.

So I braved the freezing rain, asked a dozen people for directions, and finally found the ASKA A5. Speaking of dreamers, the flying car was parked near a stop on the Vegas Loop, the tunnels Elon Musk’s Boring Company has built under the Las Vegas Convention Center. Chauffeured Teslas cut travel time between buildings from a 25-minute walk to a 2-minute ride.

While I wasn’t allowed inside the actual ASKA flying car, it seems more real than, say, the Hyundai-Uber mockup placed high up on a pole at a previous CES.

ASKA also brought a two-seat simulator, which I got to “fly” with a young instructor.

The ASKA A5 has some innovative features and an interesting operating paradigm. Billed as the world’s first vertical takeoff and landing vehicle that can be driven on roads, it purportedly can travel up to 250 miles by air. However, speaking to company co-founder Guy Kaplinsky, it seems its normal operating radius might typically be less than 100 miles.

That’s where the ASKA On-Demand ride service, expected to launch in 2026, comes in. Kaplinsky believes that for many city workers, the exurbs offer a better, more affordable life. A drive from San Francisco to an exurb like Gilroy, (79 miles) or from Mountain View to the former garlic capital (44 miles) might take two hours. A flight on the ASKA on-demand ride service could cut that down to 30 minutes.

Targeting availability in major cities and surrounding areas by 2026, ASKA’s ride-sharing program will have certified pilots pick ride-share customers up at their homes and fly them to their destinations. The company has launched early-bird free registration for ASKA™ On-Demand.

Unsurprisingly, ASKA founders Guy and Maki Kaplinsky have technical backgrounds. Their previous startup, IQP Corporation, was a pioneer in the Internet of Things and was acquired by GE Digital in 2017.

Their latest project, the ASKA A5, was designed to bridge automotive and aviation design. It is powered by a hybrid team of lithium-ion batteries and a gasoline engine that acts as an onboard range extender to “increase power source reliability.” The vehicle fits in existing parking spaces and can be charged at home and EV charging stations. The range extender engine runs on premium gasoline from gas stations.

While the “E” in eVTOL is supposed to stand for “Electric,” many eVTOL builders are adopting hybrid technology. Batteries are heavy and do not yet provide the energy density of jet fuel or petroleum. The hybrid (gas + electric) trend is seen in the automotive industry as well. Toyota boasts of its “electrified” line of vehicles, of which only a handful are electric. GM just launched an “electrified” $104,000 Corvette that produces 655 horsepower from its gas and electric engines.

Speaking of cars, in driving mode, the ASKA A5 uses in-wheel motor technology. Its four wheels are placed outside the fuselage for all-wheel-drive traction. Driving or flying, it seats 4 passengers.

In flying mode, the vehicle’s wings with six rotors unfold. This allows it to either take off vertically from a helipad or do runway takeoffs. ASKA says the large wing is optimized for smooth landing and energy efficiency, while each tilt rotor is utilized for vehicle control.

In the event of an emergency, the large wings can help the A5 glide to a safe landing. Additional safety features include the hybrid propulsion system, which provides fuel for a minimum of 30 minutes reserve flight time, a current FAA requirement. ASKA even includes a ballistic parachute in case of emergency to save the whole aircraft.

What happened to the eVTOL world of take-off pads popularized by Uber Elevate, now part of Joby? “In the U.S. alone, there are around 15,000 airfields with runways,” explains Maki Kaplinsky, Cofounder & Chair/COO. “Our engineering enables ASKA to take off from a runway of 250 feet in less than 5 seconds using in-wheel motor technology.”

The Aska A5 “represents something which humans have dreamed of for decades: a fully functional, full-scale prototype of a drive and fly electric Vertical Takeoff and Landing vehicle, a real flying car,” said Guy Kaplinsky, Cofounder/CEO. “ASKA addresses not only consumers, but there is also significant business potential for emergency response, military use, and on-demand ride-sharing mobility services.”

Targeted for commercialization in 2026, the company is now taking pre-order reservations at www.askafly.com.