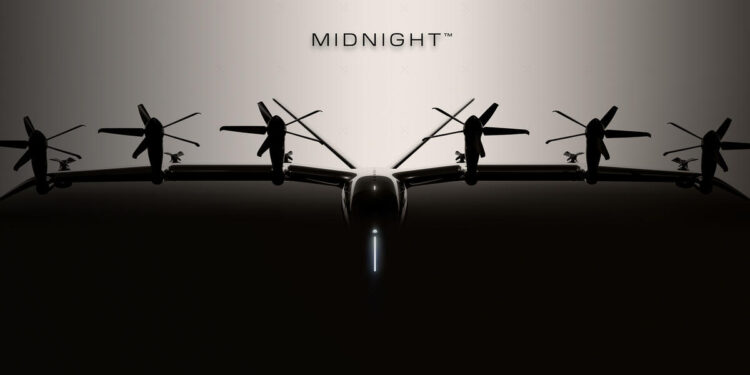 
Archer Aviation has completed the preliminary design review for the initial production version of its eVTOL air taxi and revealed the name of the aircraft. Dubbed “Midnight,” Archer says its eVTOL is on track to enter service by 2025, company officials told investors in a quarterly earnings call on August 11.

While the company still says it expects to complete type certification in 2024, it now seems to be allowing some extra time for the first commercial operations to get underway. These flights will be conducted by both Archer itself and customers such as United Airlines.

In a letter to investors issued together with Archer’s quarterly earnings report, the company said it plans to reveal the design of its four-passenger Midnight in 2023. It is also getting ready to select the site where it will build a manufacturing plant for its production aircraft, and it expects to announce the location and break ground on the facility later this year.

Thursday’s news came hot on the heels of another major announcement from Archer. On August 10, the company reported that it had received a $10 million down payment from United Airlines for the first 100 of 200 production eVTOLs United had provisionally agreed to buy in February 2021. Archer said the deal represents one of the first of its kind for the budding eVTOL industry, as many eVTOL developers have signed only non-binding agreements with prospective customers that have not yet made any formal payments.

In its earnings report for the second quarter of 2022, Archer reported total operating expenses of $80.2 million, up $14.9 million from the $65.3 million it spent in the first quarter. The company attributed the higher spending to increased investment in its key technology development programs, as well as a $3.4 million severance package for its former co-CEO, Brett Adcock, who left the company in April. The full earnings report is available on the company’s investor relations website.

Midnight is Archer’s second eVTOL design; its first is Maker, a two-seat prototype that the company revealed last summer. Maker has flown more than a thousand test flights since it first took to the skies in December 2021. Archer recently ramped up flight testing with the Maker prototype, flying the aircraft several times each week and sometimes even multiple times per day. “Maker is flying regularly and will continue to build out its flight profile to inform the design of the production aircraft, Midnight,” a company spokesman told FutureFlight.

Archer has now completed two of the three phases of Maker’s flight testing program. The first phase involved a series of hover flights. The second involved what the company calls “critical azimuth” testing, in which Maker flew in various directions and attitudes to test its configuration and flight control systems in various simulated wind conditions. The third phase will involve the first full transition flights, in which the aircraft will transition from hover mode to full wing-borne cruise flight. Archer said it expects to complete the first full transition flight in the second half of 2022.

“The technical progress of the Maker aircraft has been outstanding,” Archer CEO Adam Goldstein said during Thursday’s call with investors. “It is an important aircraft for us because it has validated many of the key capabilities of our 12-tilt-six configuration, software, flight control, and other key design decisions.” (The “12-tilt-six configuration” refers to the aircraft’s 12 electric propellers, six of which tilt forward during flight.) “The advancements we have made with Maker have proven we have chosen the right aircraft configuration that can balance performance against complexity,” Goldstein added.

Midnight will have a range of up to 100 miles (160 kilometers) on a single charge, and Archer says it expects the fully electric aircraft to be able to conduct successive 20-mile flights with only 10 minutes of charging time in between. It will seat four passengers plus a pilot and can carry payloads up to 1,000 pounds (450 kilograms).