Archer Will Reveal Its Midnight eVTOL Air Taxi in November 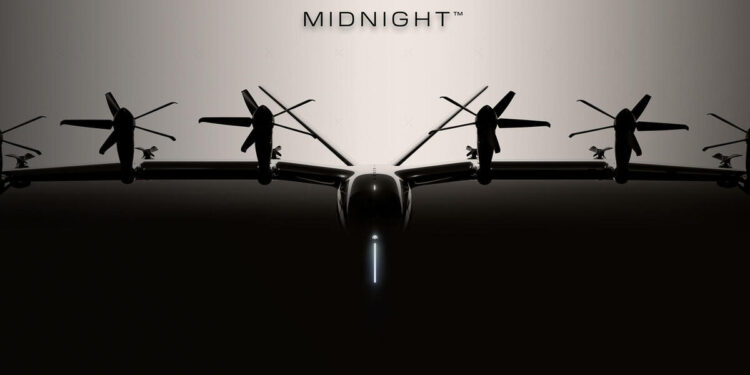 
Archer Aviation has set the date for the grand unveiling of its first Midnight eVTOL aircraft. The California-based start-up says it will reveal the initial production version of Midnight during a special event at its Palo Alto facility on November 16.

Midnight is a fully electric eVTOL air taxi designed to carry four passengers plus one pilot to a range of up to 100 miles (160 kilometers) on a single charge. However, Archer says it’s mostly intended for shorter, successive flights of around 20 miles, with about 10 minutes of charging time required between each trip.

The company announced in August that it had completed the preliminary design review for the new aircraft, which it says is on track to enter service in the United States in 2025. Also in August, United Airlines placed a $10 million down payment for 100 of Archer’s eVTOL air taxis, which the airline plans to use to transport passengers to and from its main hubs.

Midnight’s Roots Are In Maker

Archer, which was founded in 2018, revealed its first eVTOL prototype in June 2021. That aircraft, called Maker, is a two-seat technology demonstrator that the company has flown more than 1,000 times since its test flight campaign began in December. Although Archer is now focused on developing Midnight, the company isn’t ready to wrap up Maker’s flight campaign just yet.

“Maker’s flight test program continues to provide vital data to support the development and design of Midnight,” Archer co-founder and CEO Adam Goldstein told FutureFlight. “Having successfully validated various systems through this second phase of flight testing, Archer is now in the third phase of its program during which it will evaluate the aircraft’s performance at increasing forward speeds with the goal of completing a full transition flight by the end of the year.”

In fact, Archer said it plans to demonstrate a transition flight of the Maker aircraft for attendees of Midnight’s grand unveiling in November. But a company spokesman told FutureFlight that Maker has not yet successfully transitioned from hover to wingborne flight during testing.

Maker and Midnight share several similarities. In addition to the same V-shaped tail, both aircraft have the “12-tilt-six” configuration, with six tilting propellers mounted on the front of the aircraft’s fixed wing and six aft stationary lifting propellers.

However, Midnight will be larger than Maker. Not only will Midnight’s cabin seat two more passengers, but it also has a longer wingspan. The two-seat Maker has a wingspan of 40 feet and weighs about 3,500 pounds, while Midnight has a wingspan of 47 feet and weighs close to 6,500 pounds, Goldstein said. “So, it’s a bit bigger of a vehicle, but it’s only 20% bigger by volume. It just has a lot more weight from batteries and payload,” he said.

Aside from Midnight’s size and its basic configuration, Archer has not yet revealed any other details about the new aircraft. The company says it will share more information about Midnight’s specifications and capabilities, including its electric powertrain system, at the unveiling event next month. Archer also said it plans to provide updates on its progress toward FAA certification of the Midnight aircraft. The company plans to operate air taxi services under the FAA’s Part 135 rules for on-demand air charter services.

“We continue to work closely with the FAA to move efficiently through the certification process with the goal of achieving our air operator’s certificate in 2024,” Goldstein said. “We’ve made great progress on this front, having most recently received our approved and signed FAA G-1 Issue Paper,” which outlines the certification basis of Archer’s aircraft. The next step will be to finalize its G-2 Issue Paper with the FAA, establishing the means of compliance to meet the requirements spelled out in the G-1 document.

Once Archer’s Midnight eVTOL receives the necessary FAA approval to begin operations, it will take a little while longer for the company’s fleet to get off the ground. While the company originally stated that operations would begin in 2024, the same year it expects to achieve type certification, it recently shifted the projected start of operations to 2025.

Archer’s director of strategy and business development, Andrew Cummins, told FutureFlight that there will “probably be a few months lag between the time when the aircraft is certified and when the service is up and running in our initial markets.” Cummins added that “once we get the aircraft certified, there’s just a little bit of time that you need to stand up the overall service.”

In a recent tweet, Archer said that it is planning to develop two separate revenue streams for Midnight, separating its planned ridesharing service from its role as an original equipment manufacturer (OEM). The OEM side of the business, called Archer Direct, will focus on selling aircraft to third parties such as United Airlines. Meanwhile, Archer is also planning on developing an aerial ridesharing service, called Archer UAM, through which passengers can book urban air mobility flights directly via the company.

Archer UAM will operate much like the ground-based ridesharing services that many people use today, with a mobile app that passengers can use to book their flights on Midnight. “We are seeking to create the most seamless, integrated customer journey that we can, and really that’s from start to finish or, or door to door,” Cummins said. “You open up your app, you put in your destination, and Archer will pull together an entire end-to-end journey that is multimodal, that allows you to get from your door to the initial vertiport where you would catch your airplane. You would then fly to the nearest landing vertiport, and then Archer would also help you get to your final destination.”

Archer has said that it plans to charge a rate of between $3 and $4 per passenger per mile when it initially launches its ridesharing service. That means that for a 20-mile flight, each passenger can expect to pay between $60 and $80.

Cummins explained that Archer plans to launch its ridesharing service in Miami and Los Angeles before making the service more widely available across North America. “Over time, as we begin to really become efficient with our operations and we get the blueprint down, that’s when we’ll have to expand into new markets and new territories,” Cummins said. “There’s no doubt there are very attractive markets outside North America, and we’re excited to bring our service to cities and communities globally.”

Initially, however, Archer will focus on what it calls “trunk” routes, flying passengers on limited flights between airports and city centers. Over time, it will develop “branch” routes spread out across larger areas.

The biggest limitation to where Archer will be able to operate is the availability of vertiports. Until that infrastructure becomes more widespread, Archer will have to make do with existing infrastructure, such as helipads and airports, Cummins said. He explained that airports are “very attractive” for early operations because they’re already zoned for commercial aviation activity and serve as convenient operational bases for maintenance, repair, and overhaul (MRO) services.

Archer is also studying the possibility of converting underutilized infrastructure assets in communities into vertiports, Cummins said. For example, the company is looking into using the rooftops of parking structures as vertiports for urban air mobility services. However, Goldstein stressed that Archer is not interested in being in the real estate business. Rather, he anticipates that other companies and possible partners will provide the necessary infrastructure as the UAM market matures.