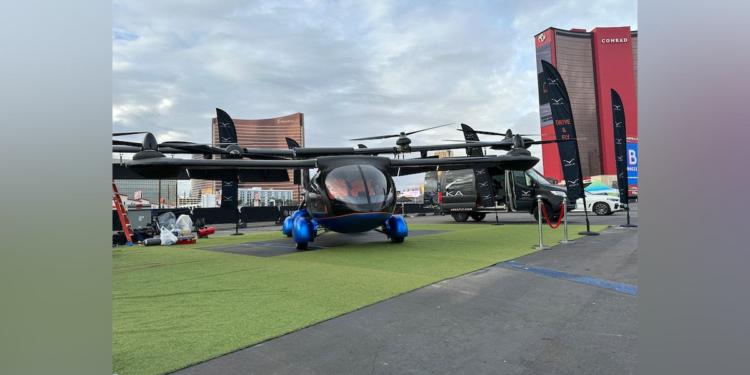 
The first fully functional prototype of the ASKA A5 electric drive and fly Vertical Takeoff and Landing (eVTOL) vehicle made its debut at CES 2023. The size of an SUV, the ASKA A5 is the world’s first four-seater electric vehicle that can travel by road, and up to 250 miles by air on a single charge. The company also announced the ASKA On-Demand ride service (expected to launch in 2026) that will feature a fleet of ASKA vehicles, operating on-demand in major cities and their surroundings.

From horse and buggy, to paved roads, mass-produced automobiles, and the Interstate Highway System – personal transportation and infrastructure have continuously evolved. However, ASKA points out: “Roadways quickly became congested, traffic was born, and now people are spending too much of their lives in traffic. There needs to be a ‘step change.’ A new transportation solution that addresses the biggest challenges we face – cost of living, climate change, affordable housing, effective infrastructure, and quality of life.

“It’s something new that was predicted long ago but is finally becoming a reality: the flying car.”

“Our unveil at CES represents something that has never been accomplished in the world, but which humans have dreamed of for decades: a fully functional, full-scale prototype of a Drive & Fly electric Vertical Takeoff and Landing, a real flying car. We’re making history with ASKA and defining the next 100 years of transportation,” states Guy Kaplinsky, co-founder/CEO. “ASKA is positioned as a new generation vehicle that combines the convenience of an automobile with the ease and efficiency of VTOL and STOL flight. ASKA is a vehicle that addresses not only consumers, there is also significant business potential in emergency response use, military use, as well as on-demand ride-sharing mobility services.”

ASKA requires minimum updates to the current infrastructure. To perform a vertical take-off or landing, ASKA requires only a compact space, such as a helipad or vertiport. The vehicle fits in existing parking spaces, it can be charged at home and EV charging stations, and the range extender engine runs on premium gasoline purchased at existing automotive gas stations.

At first glance, the ASKA A5 is unlike any vehicle ever developed. It bridges the best in modern automotive and aviation design. Powering the ASKA A5 is a proprietary power system that features lithium-ion battery packs and a gasoline engine that acts as an onboard range extender. This dual energy source delivers a 250-mile flight range and drastically increases power source reliability.

In flying mode, the vehicle’s wings with six rotors unfold, allowing the vehicle to either take off vertically, or do conventional runway takeoffs. The large wing is optimized for gliding, smooth landings, and efficient energy consumption, while each tilt rotor is utilized for vehicle control.

“In the U.S. alone, there are around 15,000 airfields with runways,” explains Maki Kaplinsky, co-founder & chair/COO. “Our innovative engineering enables ASKA to take off from a runway super fast using our unique in-wheel motor technology. This is a revolution in aviation, enabling ASKA to take off in less than 5 sec with a runway of 250 feet, which brings the closest experience to a F-18 Super Hornet fighter jet taking off from an aircraft carrier for our customers. Pilots will have plenty of options for how and where to fly ASKA. ASKA’s revolutionary ‘Drive and Fly’ design enables us to use existing infrastructure and provide ‘last mile’ transportation. ASKA lets people drive, fly and then drive to their final destination in one vehicle. This ‘Drive and Fly’ approach will enable air mobility to be more easily and cost-effectively adopted.”

ASKA is designed for the highest safety standards. For example, ASKA has large wings and In the event of an emergency, the large wings can glide the craft to a safe landing. ASKA is equipped with dual energy sources, both batteries and an engine. Six  propellers, one on each wing, ensure better redundancy for safe landings. The best-in-class hybrid propulsion system provides a minimum of 30 minutes reserve flight time, which is a critical requirement by the FAA today. ASKA also includes a ballistic parachute in case of emergency to save the whole aircraft.

In 2020, ASKA signed a Space Act Agreement with NASA to advance its participation in the Advanced Air Mobility National Campaign, jointly organized by the FAA. In 2022 the FAA accepted ASKA through their intake board and the company is progressing towards ASKA’s type certification. Full-scale flight testing is next.

The ASKA A5 is targeted for commercialization 2026 (subject to standard regulatory approval and certification).

Flying Car With No Wings: Alef Model A Claims 2025 Takeoff