Flying Car With No Wings: Alef Model A Claims 2025 Takeoff 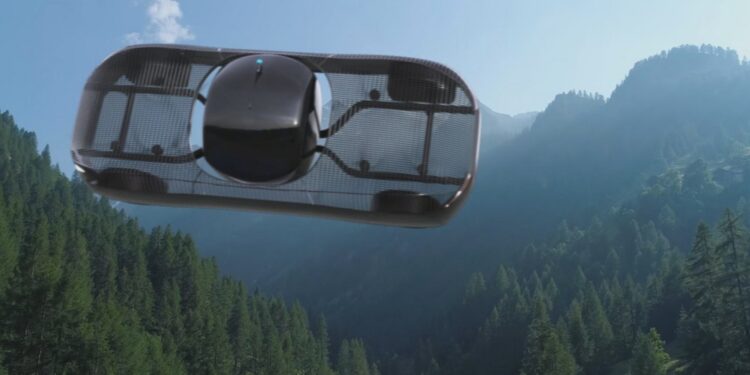 The Alef Aeronautics Model A is a vehicle that can simply fly over a traffic jam. Or anything else, for that matter.

Alef Aeronautics is a Silicon Valley startup that has just debuted its flying car. The company has been driving and flying its prototype since 2019 and now it’s ready for takeoff.

The new car is called the Model A, and Alef says it will have 200 miles of electric driving range and 110 miles of range when flying. If you’re looking at the photo and wondering where the wings and propeller are, you’re not going to find them.

Instead of a messy system of disconnecting or collapsing wings, think of the Alef Model A like a drone where you’re the camera on a gimbal. That bodywork is mostly an open mesh, not solid panels. Inside that mesh are eight propellers.

The Model A takes off vertically thanks to those eight spinning propellers, sort of like a sedan-sized drone. Once airborne, the car transforms into flight mode.

Attached through a gimbal, the bodywork rotates around the bubble-like passenger compartment. This transforms the car — where you face down the length of the body — into a flying wing where the bodywork extends to your left and right. In flight mode, there’s no part of the flying “car” in front of or behind the driver-turned-pilot, just the front of the bubble.

For safety, the Alef Aeronautics Model A has “triple to octuple redundancy of all key components,” as well as real-time diagnostics. Alef says the flying car has the ability to reject the transition to flight if it detects something wrong. It will be able to detect and avoid obstacles and glide to a controlled landing.

“The Alef Model is a modern solution for both urban and rural transportation needs in the 21st century because it is the fastest and most convenient transport ever created from the point of origin to the final destination. By enabling consumers to choose driving or flying mode, the Model A allows the optimal path depending on road conditions, weather and infrastructure.”

Dukhovny and the other members of the Alef team insist that the sky is the only answer to congestion. He says that adding a third dimension of travel will fix traffic, which is something that more lanes can’t do. If there’s any place where more lanes won’t fix traffic, it’s the San Francisco Bay Area in California.

Beyond traffic, a vehicle with vertical takeoff and landing capability could revolutionize overland travel. The Alef Aeronautics Model A can make previously unreachable sites just a quick hop away. Imagine being able to transport yourself over any terrain without leaving so much as a bent blade of grass.

Another key point missing from the presentation was anything from the National Highway Traffic Safety Administration or the Federal Aviation Administration — two government groups in charge of safety on the ground or in the air. These represent massive hurdles for a company looking to build a new car or a new aircraft, let alone one vehicle that does both.

Pre-sales for the Alef Aeronautics Model A are now open. A $150 deposit puts potential buyers in the “general queue” to get their vehicles. For $1,500, you can get into the priority queue for deliveries expected to start in 2025.

Beyond the Model A, Alef has big plans for the company’s future. Other models are in development, including the four-person Model Z. Alef is expecting that model to offer more than 300 miles of flight and 220 miles of range, all for a price of $35,000. The company says the Model Z is scheduled for 2035.

Passenger ‘Drones’ To Carry People Thru The Sky

The brand claims the ‘Autonomous Aerial Vehicle’ will fly itself, whisking the masses on the most glorious of commutes. Read more…