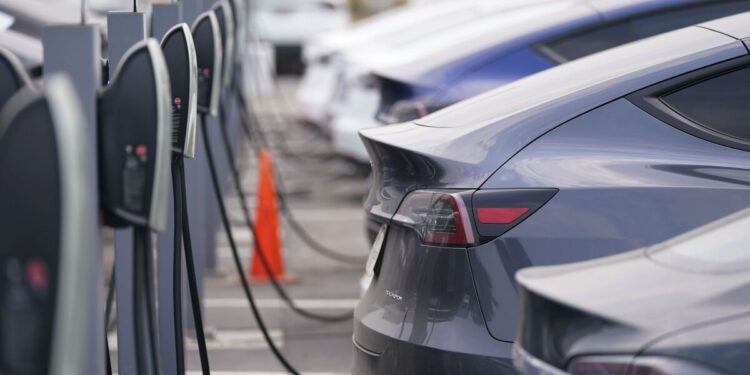 
Californians of modest means interested in buying electric vehicles and plug-in hybrids will receive more money in state-funded rebates in 2023 — and additional incentive programs will come as the new year progresses.

To encourage low- and moderate-income Californians to buy zero- or low-emission vehicles, the state’s Air Resources Board has boosted the rebate amounts by $3,000.

Customers who qualify will now receive a rebate of $7,500 for purchasing a battery electric vehicle and $6,500 for plug-in hybrids. The $7,500 rebate also applies to hydrogen fuel cell vehicles.

The increases will go into effect in February. The rebates also apply for leases of at least 30 months.

The Clean Vehicle Rebate Project, in place since March 2010, defines low- to moderate-income as 400 percent of the Federal Poverty Level, which varies depending on the size of a household.

With California banning the sale of all new internal combustion engine vehicles by 2035, state policymakers want to encourage adoption of zero- and low-emission cars and trucks in ever-increasing numbers.

But the average price for an electric vehicle, or EV, has climbed to almost $67,000 — a figure out of the price range for low- and middle-income buyers. Boosting the rebates is designed to help bridge the financial gap.

“It’s creating access that otherwise wouldn’t be available,” said Jonathan Changus, director of California Transportation Programs for the Center for Sustainable Energy, the San Diego nonprofit that administers the rebate program for the state. “As we’re seeing demand increase for EVs, the folks that are purchasing them are of means. Without the incentives though, the low and moderate income families are not going to have access to cleaner, lower maintenance vehicles.”

No rebate is available to those whose gross annual incomes exceed:

The money for the rebate program primarily comes from the state’s general fund in the 2021-22 fiscal year budget.

Other incentives are coming in 2023.

During the first half of the year, the Clean Cars 4 All program will be available in the San Diego area. It provides generous grants to lower-income drivers who trade in their old gasoline-powered cars and trucks for zero- or low-emission vehicles.

Administered through the San Diego County Air Pollution Control District, $9,500 will be available for battery-electric vehicles and plug-in hybrids.

Not a rebate, the money typically comes in the form of a voucher redeemable when a vehicle is purchased from a participating dealer.

To qualify, applicants must fall below 300 percent of the federal poverty level, which comes to $83,250 for a family of four. Plus, the Clean Cars 4 All program allows an extra $2,000 if applicants meet certain needs-based criteria.

Called the Pre-Owned EV Rebate Program, SDG&E will offer $1,000 rebates for all customers in its service territory and $4,000 for low-income customers who qualify. About $5 million per year is budgeted for the three-year program and will be funded through the state’s Low Carbon Fuel Standard credits, not ratepayer dollars.

SDG&E officials expect to roll out the initiative in the second quarter of 2023.

“The back half of 2023 could be a great time to buy a new EV, as far as the incentives are concerned,” Changus said. “If you need to go now, though, the good news is there is an available program (the rebates from Clean Vehicle Rebate Project) that’s flush with funding that in February is going to offer a much larger incentive” than in previous years.

On top of all that, the federal government offers a tax credit of up to $7,500 for buying an EV — although there are some complicating factors.

As part of the recently enacted Inflation Reduction Act, the vehicle must be assembled in North America to qualify for the full credit. That led to confusion and complaints from some automakers regarding the sourcing of material and batteries that go in EVs and last week the U.S. Treasury Department announced it will delay issuing guidance on the tax credit until March.

Once the details are sorted out, California drivers who receive money from the Clean Vehicle Rebate Project and the soon-to-launch San Diego version of the Clean Cars 4 All Program and the SDG&E used EV program will also be eligible to receive the federal tax credit.

Back in January 2018, then-Gov. Jerry Brown set a target that envisioned 5 million zero-emission vehicles in California by 2030. As of Oct. 1, just over 1.3 million are on state roads and highways.

And in the most recent quarterly report by the California New Car Dealers Association, electric vehicles and hybrid plug-ins combined to make up 18.7 percent of the market share of new vehicles sold in the Golden State.