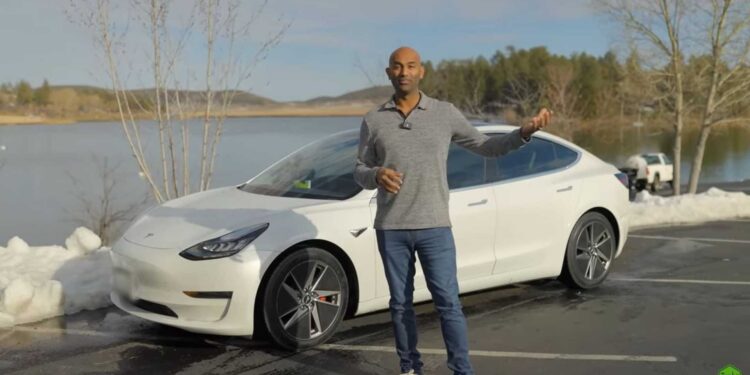 
Tesla Model 3 Performance owner Two Bit da Vinci calls the entry-level Tesla sedan – a car that many folks still consider expensive – the “greatest deal in automotive history.” He asks if he’s crazy to suggest that this is true, prior to revealing all of his data in an attempt to substantiate the comment.

This Model 3 owner bought his car back on December 26, 2019, so he’s literally owned it for almost precisely three years. During that time, he put 60,000 miles on the odometer, which is arguably impressive. That’s 20,000 miles per year, more than the average driver drives, and during a time when many people weren’t driving nearly as often thanks to the pandemic.

At any rate, Two Bit says he had no idea what to expect when he first bought the Tesla. While it was likely much cheaper then than it is today (unless you’re taking advantage of the end-of-year discount), it was still a pricey car compared to similar gas-powered models at the time.

Now that he’s owned the Model 3 for a long period of time, and really gotten some use out of it, it’s time to share his experience. Two Bit has saved all his records so that he can share details about every single dollar he’s spent since taking delivery. We’re talking about charging costs at home, public charging costs, repairs, maintenance, and more. You name it, and he probably has a record of it. It’s what you do when you’re a YouTube influencer hoping to share credible details about vehicle ownership.

The video is very informative and even includes details unrelated to the Model 3’s total cost, such as comfort, space, quality, software, battery degradation, and even Two Bits’ overall opinions after his years behind the wheel of the Tesla. While we encourage you to watch the entire 22-minute video, he has provided the following chapters and timestamps for those who’d rather check out a specific topic.

The video reveals that Two Bit paid $3,617 to charge the Model 3 over three years. He calculated that a Honda Civic would have cost about $9,000 to fuel over the same period of time. He hasn’t had to deal with many repairs, and maintenance has been minimal. Over the three years, he spent just over $3,000 on the car, which includes rims and two sets of tires, though he did sell his previous tires and rims to put some money back in his pocket.

As always, after you’ve had an opportunity to check out the video, let us know what you think. How much money have you saved by owning an EV?

EVTOL aircraft could become common in cities in the 2030s: Deloitte