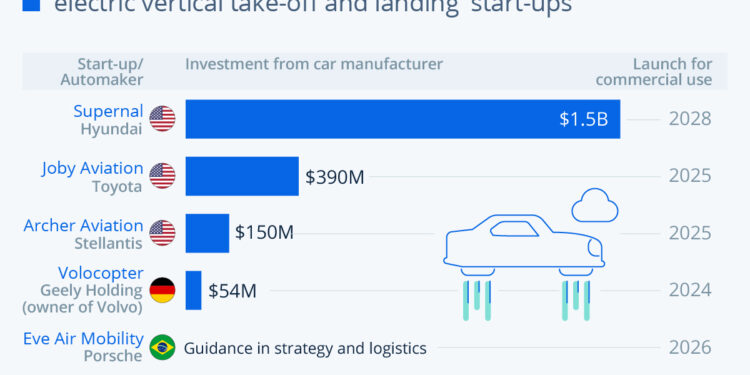 
As the world tries to move away from fossil fuels and towards greener forms of transportation, electric air taxis are capturing the attention of innovators around the world – including auto manufacturers looking for new and lucrative ways to adapt.

As our chart shows, the likes of Toyota, Porsche and Hyundai see potential in such technologies, known in the industry as eVTOL, or electric vertical take-off and landing aircraft. The following auto manufacturers are offering not only financial investments but also their expertise and knowledge on areas such as mass production and supply chains to give their chosen start-ups a leg up in the eVTOL race.

Journalist Michael Verdon of RobbReport provides insight on the six following collaborations, detailing how Toyota has invested more than $390 million in the Californian start-up Joby Aviation. The company had originally planned to launch their commercial service in 2024 but have now pushed back the timeline to 2025. Meanwhile, Stellantis (formerly known as Fiat Chrysler) has pledged $150 million to the U.S. based company Archer Aviation. Their latest model, the Archer Midnight, is a five-person air taxi designed for ‘short-hop’ trips that will take around 20 minutes and is set to be available from the same year.

Even from this shortlist, it’s clear that eVTOLs are piquing interest internationally, with the range of start-ups spanning the United States, Germany and Brazil. Other, much larger, aircraft companies working on eVTOLs include Airbus, Embraer, Boeing, Overair, and NASA.

According to Morgan Stanley Research, although it’s still early days for urban air mobility, with the advancements in overlapping technologies such as batteries, processing and computing power, and advanced composite systems, autonomous aircraft could be commonplace by 2040.