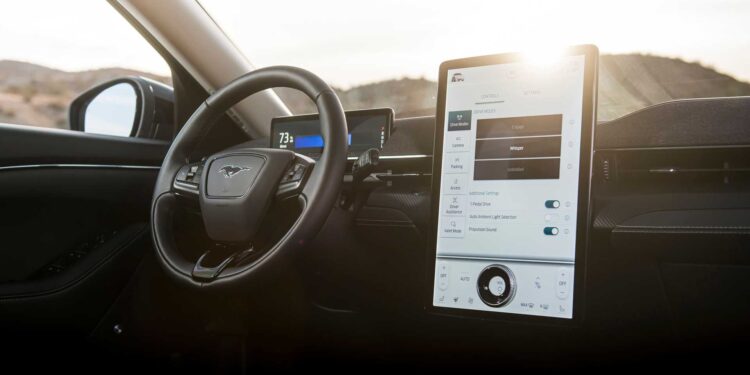 
Ford has released an over-the-air update for the Mustang Mach-E’s Sync 4A infotainment system tat allows for easier adjustment of climate functions while on the move. Update 4.1.2 also brings user interface changes and even two new games, but the new way to change temperature has to be the most important addition, especially from a safety standpoint.

And it doesn’t just work for temperature. If the driver now taps the icons in the climate panel at the bottom of the Mach-E’s big 15.5-inch screen, such as fan speed and the heated seats, these too will be adjustable via the knob.

This was demonstrated by Ford North America communications manager Mike Levine, who posted a video as a response to another tweet announcing the recent update. He doesn’t actually show either temperature or any of the other functions being adjusted via the physical control, but he does show that you can toggle what the knob controls.

While it may not sound like a big deal, it actually is given how much safer it is for the driver to make these adjustments by twisting a knob then by having to take their eyes off the road for several seconds in order to make sure they prod the screen in the right place. It’s one of the thing both journalists and car owners seem to dislike, and it looks like the critics were vocal enough to prompt Ford to make this change.

It’s still not perfect, though, given that you still can’t rely on muscle memory as you would in a car with completely physical controls, but if it means Mach-E drivers will spend less time looking at the screen and more time looking at the road, it’s definitely a worthy addition.

Ford says that with this new update it also simplified the home screen’s layout, changed status bar icons and added in-vehicle scheduling for software updates. The two new games it added are called Bridge Battle, a competitive bridge-building game, and Parking Lot, which is a puzzle game that should be familiar since versions of it are quite popular on Apple and Android phones.

Tesla Model S And X Get Round Steering Wheel As Standard, Yoke Optional