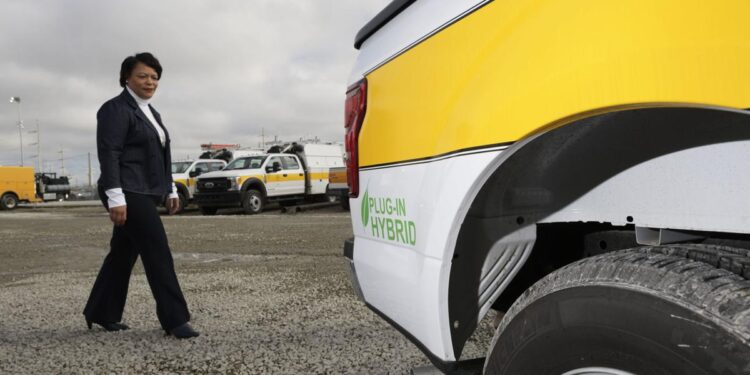 
Progress is slowgoing on Mayor LaToya Cantrell’s goal of weaning the city’s vehicle fleet away from fossil fuels, a core strategy laid out by the administration in its plan to run the city entirely on green energy by 2050.

Every one of the city’s 1,699 vehicles still depends on gasoline or diesel, according to an administration report to the City Council . That’s despite the city’s move three years ago to join the Climate Mayors Electric Vehicle Purchasing Collaborative, a group aimed at helping U.S. cities negotiate down vehicle prices.

The report on electric vehicles, or EVs, was delivered as part of a council ordinance passed one year ago that requires the city to exclusively purchase electric vehicles by 2025. City officials say they are intent on meeting that goal, but they have run into complications in doing so.

Cantrell frequently promotes New Orleans as an international leader on local efforts to combat climate change, and the document released lays out ambitious plans to meet its emission reduction goals. It moves up a deadline for a renewable-only local electric grid by five years, from 2040 to 2035.

But the plan also pushes back a deadline to cut in half the city’s greenhouse gas emissions. The new plan calls for meeting that initial goal in 2035, five years later than the 2030 deadline that former Mayor Mitch Landrieu set, with the end goal of net-zero emissions by 2050.

The move to an all-EV fleet was an important leg in that effort. But even as other member cities have acquired dozens of vehicles through the purchasing collaborative, New Orleans has not purchased a single one. City officials now say they are uncertain if out-of-state vehicle purchases through the collaborative comply with state procurement laws, a peculiar hang-up that other cities do not seem to have encountered.

“Our procurement office is engaging with the State Procurement Office to make sure that our membership, or our intent to join it and use that as a means of getting the vehicles, complies with all the state procurement laws. So we’re awaiting that response from the state,” said Dan Jatres, a city infrastructure specialist.

A spokesperson for the Division of Administration said the city’s inquiries have been forwarded to the Attorney General’s Office. An AG spokesperson did not respond to an inquiry .

Installation of charging stations is also going a bit slower than officials had hoped. An Entergy pilot program called for 30 free, public charging stations to be installed across the city by the end of this year. An Entergy spokesperson said this week that only about half of that number would be ready by that time. City officials pegged the year-end number at 11.

“EV vehicles have probably twice as many electrical components in their engines as a traditional combustion engine. And that’s where the supply chain has broken down,” said Courtney Story, director of planning and administration.

The council in January directed the administration to begin leasing and buying low-emission vehicles in 2023, and to exclusively buy electric and other no-emission passenger vehicles by 2025. Council members passed the vehicle-buying rules with an eye on large pots of money the federal government is offering to cities to build out EV charging networks and reduce fossil fuel emissions.

The mayor’s staff said this week they expect to ramp up purchasing next year, with the help of a yet-to-be-hired consultant.

“We are mandated to do it and we’re absolutely in policy alignment that it’s something that needs to be done,” Chief Administrative Officer Gilbert Montano said.

The power of bulk buying

The city joined the EV purchasing collaborative as a way to improve air quality, save taxpayer money and reduce its oil dependence. With about 500 local governments enrolled, the collaborative uses its combined buying power to set pre-negotiated rates that have run thousands of dollars below advertised prices. More than 4,000 vehicles have been purchased through the collaborative since 2018.

“Vendors and manufacturers understand we have hundreds of local governments with thousands of vehicles in their fleets,” said Sarah Reed, a program director with the Electrification Coalition, a Washington D.C.-based nonprofit that manages the collaborative. “So, (sellers) reduce costs because they know they can do a lot of business with us.”

The process of buying an EV through the collaborative is similar to ordering a car through online car-buying platforms like Carvana and CarMax. Members scroll and click through selections of electric cars, buses, firefighting vehicles, street sweepers and garbage trucks.

Within two years of the collaborative’s launch, cities ranging in size and geography significantly increased their EV inventories, with Des Moines and Charlotte adding 15 and 42, respectively. The small city of Winter Park, Florida, purchased five.

Austin was particularly ambitious, snapping up 130 by 2020 and increasing their tally to 270 this year. The EVs have saved more money and performed better than expected, said Rick Harland, Austin’s assistant fleet manager. Austin officials hoped to save $3.5 million annually by swapping 330 gas vehicles for EVs, but they’re now on track to save closer to $5 million even before reaching their EV purchasing goals.

“I’ve been looking at the numbers for years and couldn’t believe the data was true,” he said.

“We underestimated how low the maintenance would be,” Harland said. “They’re just simpler vehicles with less things to break and less to maintain.”

EVs are considered ideal for city fleets because they achieve their best fuel economy during the stop-and-go driving typical of in-city use. Electricity prices are also less volatile than those of gas and diesel, making it easier for city managers to predict fuel costs and budget accordingly.

Government use of EVs can help demonstrate their functionality to the public.

According to the Electrification Coalition, a typical mid-sized EV car costs about $550 to power each year, and will likely produce 2.8 tons of emissions if tied to a power grid that uses fossil fuels. A gas-only car costs twice as much to fuel and produces three times the emissions.

The city’s fleet gets an average of 19 miles per gallon, according to the administration’s report. Two vehicles are electric-gas hybrids and one is a sedan that can run on a blend of gas and ethanol. The rest are gas or diesel-powered.

“As far as I know, no state outright disallows cooperative procurement completely,” she said. The coalition offers help navigating these processes, as well as fleet analysis, technical advice and case studies from other cities.

Harland said Texas also has complicated procurement rules, but Austin had no trouble joining Houston, Los Angeles and other cities to purchase dozens of EVs via the collaborative.

Whatever barriers New Orleans has to growing its EV fleet, Harland suggested an “all hands on deck” approach to overcome them sooner than later.

“Why not take advantage now?” he said. “The return on investment alone makes it well worth it.”

$10,000 batteries are needed to keep electricity running in an outage

Electric Trucks and the Future of EVs

Electric Trucks and the Future of EVs