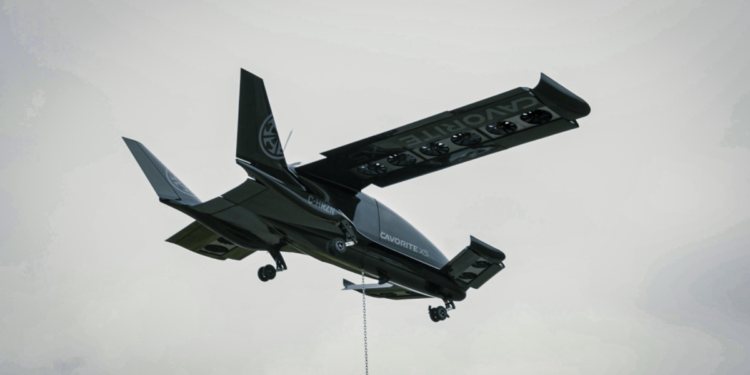 
The Cavorite X5 is a fascinating eVTOL air taxi design, capable of splitting its wing covers apart to reveal its vertical lift fans, or closing them for high-speed, long-range cruise flight. Horizon has now started flight testing its prototype.

Thanks to its low-drag design and covered lift fans, the full-scale Cavorite X5 promises to carry four passengers and a pilot at a remarkable 280 mph (450 km/h) – making it one of the fastest air taxi designs we’ve seen. Its hybrid gas/electric powertrain ensures impressive range figures too, up to 310 miles (500 km) with emergency reserves intact.

Its 10 ducted lift fans are fairly small in diameter, so they’ll spin fast and chew a lot of power in a hover; this machine, like the Lilium jet, will shine in cruise mode, acting like an efficient hybrid-electric airplane. So it’ll likely find its niche in longer-range trips rather than cross-town duties.

The prototype Horizon now has in the air is the 50% scale machine we wrote about in detail last year. Things are a little behind schedule; Horizon founder Brandon Robinson told us last July that the company planned to have the machine hovering untethered by the end of August, and flying through all phases including transition and cruise by December.

At this stage, though, the company has announced initial tethered hover tests are complete, and the X5 will soon begin testing its aerodynamically complex transition between hover and cruise modes at the ACE Climactic Wind Tunnel near Toronto.

“This aircraft has exceeded expectations during initial hover testing,” says Robinson in a press release. “It is extremely stable, is capable of full hover at only 65% power, and has hovered with 20% of its fans purposely disabled in order to test system redundancy. This [prototype] is a large-scale aircraft, with a 22-foot [6.7-m] wingspan, over 15 feet [4.6 m] in length, and capable of speeds over 175 mph [282 km/h]. It continues to yield valuable data that is constantly improving our full-scale design.”

As testing continues, Horizon will need to raise a fair whack of cash to get a full-scale version of this jaw-dropping machine built and into the grueling FAA certification process. Robinson told us last year he’s open to the idea of selling a (presumably single-seat) private version, which could be registered as an experimental aircraft – or developing it for military use while waiting for certification.