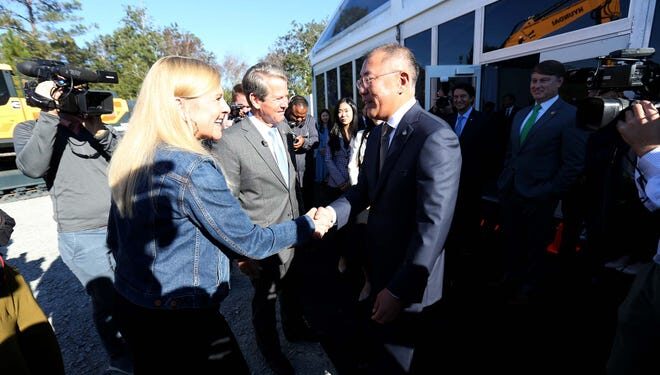 
As South Korean families prepare to take positions at the Hyundai plant, community members in Bryan, Bulloch, Chatham and Effingham counties must be ready to welcome them with open arms. More than 100 “team members” have already moved to the area.

Work assignments can be anywhere from two to five years and although the stint is short, guest speaker Jeanne Charbonneau, who spent nearly two decades serving as the Korean Family Support Coordinator for Hyundai and suppliers, said first impressions will last a lifetime.

She added it will take a collective effort to welcome these families into the four counties.

More:‘This region is perfect’: A recap of how Hyundai made its way to the Savannah region

The Savannah JDA is comprised of local leaders from four counties who worked together to make the Hyundai deal happen. That same level of cooperation will be necessary as South Korean families begin to trickle in.

Charbonneau cautioned local leaders to shy away from competing against one another and to refrain from putting those families in the middle of any controversy.

“What I mean by that is they are going to be driven by whatever plant they are in,” said Charbonneau. “I know that Mobis just announced they are going into Statesboro, so those families are probably going to want to live near that plant. There’s clearly so much cooperation going on among the counties right now. They understand they need to work together to make this long-term investment come to fruition. I’m not worried about the competitiveness but the very fact that it’s four separate counties means that as the tier two and tier three suppliers are coming in, there is going to be some competition for space.”

As families begin to arrive, many will have culture shock.

Carter Infinger, chairman of the Bryan County Board of Commissioners, suggested residents familiarize themselves with South Korean tradition and customs.

Typically, 50% of those families adjust after six months.

“It’s important that we build good long-term relationships for a successful future with Hyundai,” said Infinger. “One way to build those relationships is to be aware of the customs and traditions common in South Korea. We can learn from those that have been part of the new Hyundai Motor Company plant in other regions to facilitate our own success.”

Charbonneau advises residents to show families around town. Whether sightseeing or a boat ride, kind gestures will give families a peace of mind.

“My general advice is welcome them with open hearts,” said Charbonneau. “In most cases, they didn’t have a choice in coming here. Knowing they can and will be supported here is going to be really important. Certain things can have a trickledown effect because they will talk to each other as the rotation starts to occur. Be sensitive to their culture, know a little bit about their culture and know a little bit about their history. This economic development project is going to change the landscape of these counties in a good way but you have to be receptive to that. Let them know we are happy that they are here in our community.”

With concerns over racial prejudice and bias in schools, Charbonneau was asked how counties should prepare students to welcome their new classmates and prevent racial and offensive language.

“I think school administrators as a rule are pretty sensitive to that but they have to be aware there is going to be an influx, not just one or two students,” said Charbonneau.

Charbonneau went on to say schools should consider a buddy program and adding more ESL professionals to help students adjust to their new environment.

“If they’ve only got one person doing ELL and ESL, and they are working with the Spanish speakers and other internationals, and then there’s this big influx of Koreans, they may need to beef up that staff for three or four years. And often times, schools will have a program where one student is assigned to be the ‘big sister’ or ‘big brother’ to this Korean student. They will show him around the school, show him how lunch works and show him where the playground is. You need to be their friend and then introduce them to your friends. Kids are very guidable. They just need somebody to say let’s welcome our neighbors.”

Latrice Williams is a general assignment reporter covering Bryan and Effingham County. She can be reached atlwilliams6@gannett.com.

What’s The Cheapest Electric Car Of 2022?