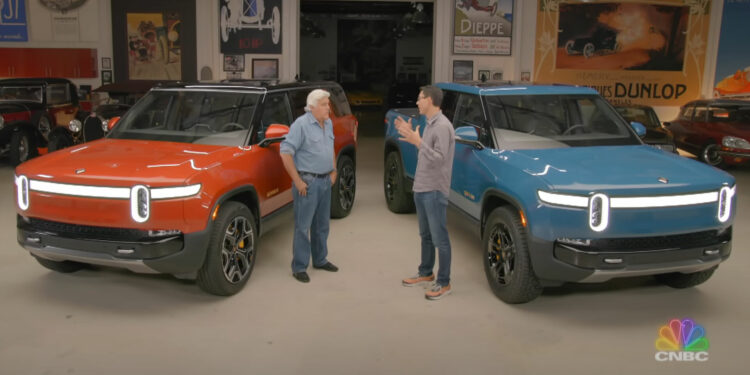 
While Rivian missed its production schedule for 2022 by a few hundred units and still has a long way to go to establish itself as a top seller, what the company has managed to do in the last few years is very impressive.

Back in June last year, Rivian chief executive RJ Scaringe had the opportunity to speak with Jay Leno and a clip from this episode of Jay Leno’s Garage has just been shared to YouTube.

In the clip, Scaringe explains how he started the company 13 years ago and acknowledges that the first few years were quite exciting and challenging. The current R1T and R1S were not the vehicles Rivian was targeting from the outset and early on as Scaringe reveals that the brand was thinking its first production vehicle would be a hybrid before changing focus to battery-electric vehicles.

A key differentiator between Rivian and other EV makers and legacy automakers is the market it is focusing on. Rivian could have gone down the unimaginative route and produced an electric sedan much like dozens of others out there. Instead, it decided to build two all-electric vehicles that are designed to not only be luxurious and comfortable on the road but to also have exceptional off-roading abilities, matching and even surpassing combustion-powered alternatives.

In the second half of the clip, Leno headed out onto the open road in a bright red R1S and he is quite impressed with the performance. This comes as no surprise considering the R1S has four electric motors, all-wheel drive, and churns out 835 hp and 908 lb-ft (1,231 Nm) of torque, figures once reserved for million-dollar hypercars.

Tesla Roadster 2.0 To Improve On Every Metric Of 2017 Prototype