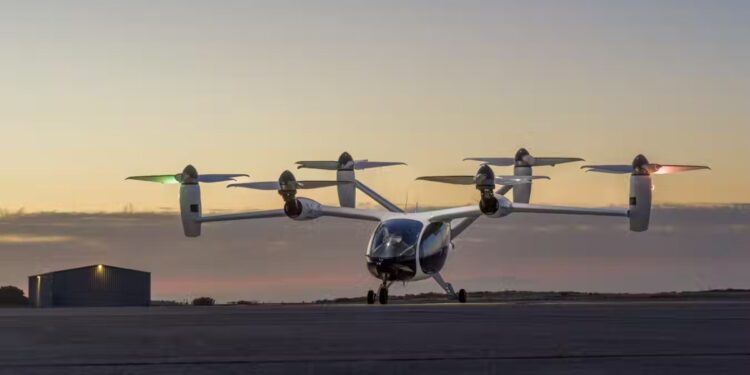 
Will Joby become the Tesla of futuristic electric takeoff and landing craft (eVTOL) and operator of sustainable air taxi services while having to battle the kind of ferocious nay-saying that Elon Musk did? In some ways it already has, after attracting the unwanted attention of a hostile hedge fund that’s reinforcing its short positions on the company’s stock by circulating in-house research dramatically decrying the activity and revenue targets Joby presented to its investors as utterly unattainable.

Meet Bleeker Street Capital, an activist hedge fund currently blaring its seriously skeptical message about Joby’s ability to produce the number of eVTOL planes it will need to facilitate the booming air taxi traffic business has predicted in coming years. To do so, the firm’s self-described “journalistic arm,” Bleeker Street Research, produced a lengthy report titled “Joby Aviation (JOBY): ‘Uber Meets Tesla In The Sky’ Is Set To Crash And Burn.” And now the Wall Street firm wants everyone to be aware of its damning opinion of the Santa-Cruz based aviation company’s ability to produce promised results.

Even its eye-grabbing headline does not do justice to the Bleeker Street dossier’s determination to create sufficient investor doubt to send the start-up’s stock into a tailspin. It seeks to do that by using allegations Joby has wildly over-stated the number of eVTOL craft it will be able to manufacture, the frequency of air taxi flights those will operate in coming years, and even its ability to obtain Federal Aviation Administration (FAA) certification any time soon. Indeed, in making its case, Bleeker Street depicts the company less as an aerial Tesla or Uber, and something closer to a post-flotation WeWork.

Such skepticism and negativity, however, shouldn’t be surprising from a hedge fund that generates its profits through short positions that (as the company itself describes them) “take advantage of differences between perception and reality.” That means it bets that stock prices in targeted companies are destined to drop against opposite Wall Street gamblers who wager they’ll rise. And now Bleeker it trying to ensure its put pays out by broadcasting the relentlessly dire conclusions its research draws on Joby.

As most people are aware in these radically divided times, there is no dearth of differing, indeed dueling “realities” on most topics – divergences based not only on biased perceptions, but even more so the personal interests and preferences that tend to inform those. Joby and Bleeker Street Capital are on opposite sides of the current tussle over whose clashing view of the air taxi future is accurate, and what the eVTOL startup’s role in that will be.

It’s a fight in which DroneDJ has no dog, but herewith explores.

UAM startups listing on Wall St.: careful what you wish for

The battle, of course, has precedents – some well-known.

Although it was much more established at the time, Tesla came under ferocious pressure from shorting hedge funds in 2020-2021 making claims the automaker would never be able to produce or sell all the cars it had forecast. Despite very bitter public salvos during that concerted effort, the financial investors who wagered on those doubts – including Michael Burry, whose earlier positions against mortgage-based derivatives made him one of the anti-hero-heroes in Michael Lewis’ brilliant The Big Short – lost a bundle.

Elon Musk, by contrast, made a mint, and Tesla and its stock are still standing strong.

Similarly, it may be instructive to recall how the quasi-collaborative shorting of GameStop stock worked out for hedge funds after outraged Reddit-based investors called BS on the attack, and drove the price of the assailed company’s shares up through en masse purchases.

Joby could use similar support. Its share prices are trading 53.5% lower than they were a year ago, though that’s due in part to the slump most tech stocks suffer after initially ebullient flotations. It also comes as most listed air taxi sector companies, including eVTOL developers Lilium and Vertical, have seen declines.

Nobody knows how the offensive against Joby will turn out, but Bleeker Street Capital clearly wants to improve the odds of its short wager with its explosive claims.

Its report is thorough in building a case challenging Joby’s published eVTOL craft production and air taxi flight estimates over the next half decade. It contends the company will never be able to deliver on either of those – nor even come close. In fact, Bleeker Street doesn’t even see Joby’s prototype obtaining certification anytime soon, despite the startup’s advanced progress toward that.

Read: FAA-CAA cooperation on AAM lifts companies like Joby active in both markets

The dossier is so dense, in fact, that readers need to consult it for themselves to fully appreciate the work that went into it, and the variety of figures produced in making its prosecutorial appeal. An early tent-pole argument reads:

“Currently with no revenue, one prototype plane, and promises of the future, Joby Aviation… claims it will produce more aircraft than the largest aircraft manufacturers today,” it states. “It will then operate an air taxi service with 9 times more daily departures than Delta… (W)e think Joby is built on a tangled web of inconsistencies and promises that are impossible to achieve.”

Therein, however, lies what seems to be a (perhaps intentional?) blind spot in Bleeker Street Capital’s short position-supporting analysis. Nearly every time it makes a damning allegation about Joby’s future business targets, it compares them to figures from major aircraft and helicopter manufacturers, and the airlines and transportation providers that fly them.

Not stopping there, Joby’s long-term plans call for 14,000 aircraft generating $20 billion a year in revenue by 2031. This is more than double the number of aircraft that Boeing has built over the last ten years.

If Joby can build 963 aircraft by 2026, and they are taking off 40 times per day, that translates into roughly 14 million flights per year. Last year, the FAA supervised 16.4 million flights in the U.S. Joby’s guidance is so aggressive that it implies a near doubling in the amount of aircraft taking off in the United States on a daily basis.

Which all sounds too good, to huge to be possible. And it is – today, anyway.

Case for the defense

But the entire vision driving next-generation craft development and operation like Joby eVTOLs flying air taxi services is based on creating something entirely new and different from legacy air sector vehicles and activity.

Indeed, that emerging future niche – with new concepts for planes, inner-urban flight routes, faster and far denser rotations – aims at something sufficiently novel that even major airlines like United and Virgin Atlantic have stumped up big bucks to be part of it. So too, for that matter, has Boeing and Airbus. Far from a zero sum combat between extant and new aviation tech, the two approaches to aerial mobility are so complimentary they offer potential win-win prospects for both generations.

Meanwhile, how instructive is it to compare eVTOL planes – designed to carry a maximum of four to six passengers several miles across a city at relatively low altitudes – using the same yardstick that measures jets and airlines transporting hundreds of travelers on each flight to destinations across states, countries, and the world?

Similarly, the report at one point compares Joby’s estimated $3 per mile cost to air taxi passengers with Blade’s helicopter and small plane transportation services that operate at far higher prices – a difference that paints the latter as pure folly.

There is, in other words, a retort to be made that the formidable Bleeker Capital dossier mixes apples with a new hybrid fruit still being created – a new entity that in some ways resembles, yet is mostly different from its industrial predecessor.

And what about its point that Joby eVTOL air taxi flight objectives would require an exponential, indeed impossible increase of current air traffic by legacy planes? Who’d expect otherwise if an entirely new generation of small aircraft began offering on-demand aerial mini-bus services at low altitudes over cities all across the US and globe?

To be fair, similar skepticism was also heard during the early days of mobile phone development from critics who pointed to the ubiquity of landlines in homes, offices, and sidewalks to justify claims the new telecom tech was too redundant to ever go big. They all own iPhones now.

There is, of course, a now-notorious habit of startups – especially those influenced by Silicon Valley culture – to not just over-state, but at times irresponsibly exaggerate the capacities of the products they’ll create, and the numbers those will be sold in.

Even well short of that, it isn’t entirely impossible that Joby may have provided investors with its most optimistic estimates for obtaining FAA certification of its eVTOL craft, and launching and scaling of air taxi activity. If so, it would represent a questionable and overly hard sales pitch to potential investors – but for now a theoretical scenario only future events can confirm or refute.

Bleeker Street Capital’s claims and objectives, meantime, deserve the same kind of pointed questioning and challenges as they’re creating for Joby. That’s especially true in light of the possibly hundreds of millions of dollars in short positions the fund stands to lose if Joby stock isn’t lower on the date its wager expires compared to the day its bet was made.

It represents, in other words, the hedge fund’s hedge in seeking to generate and justify deep market doubts about Joby’s future – and thereby create a self-fulfilling prophecy of the startup’s demise.

“There is a long history of ‘the next big thing’ in aviation, and not many have ended well,” the Bleeker Street Research report insists. “(W)e do not think Joby can do what it has told investors it can do. We are short shares of Joby, and expect it to collapse over the next several years crushed by longer than expected approval timeline and smaller manufacturing operations than it has conveyed to investors.”

Will it or won’t it?

Joby has yet to respond to DroneDJ‘s request for a comment (updates if any are forthcoming). But by all appearances it looks prepared to stand by its targets, and still plans to keep advancing toward FAA certification of its eVTOL and the launch of air taxi operations in 2024.

As it does, it may take solace against current and future attacks from shorting skeptics by remembering how Musk and Tesla fared – though that precedent is no guarantee of success.

It may also assuage “the next big thing” jab by recalling recent history’s alternative example of The New New Thing  – the title of the Michael Lewis book recounting stories about an early Silicon Valley era dynamo who defied doubters, and helped change the world by ushering it into a then improbable-sounding thing called the Internet Age.

Pepsi’s Tesla Semis Will Hit The Road in 2023: Report