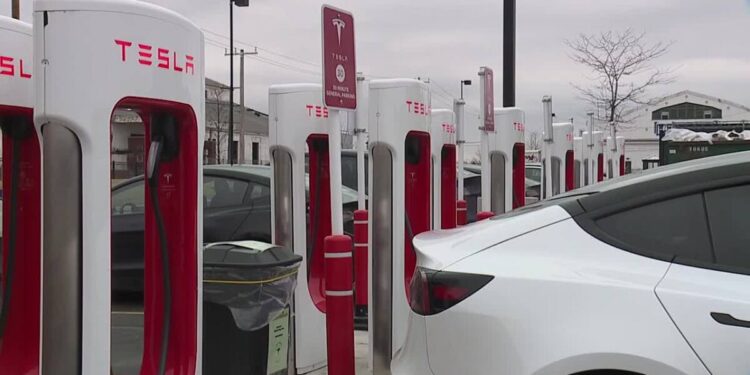 All ranging in how long they’ve owned electric vehicles from four years to just one week.

By and large — all seem satisfied.

But one common concern felt by some are a lack of charging stations once they leave the comforts of metro Detroit.

“Going like here, south down to the I-75 corridor, the charging network is pretty abysmal. There’s like nothing between here and Toledo along I-75. There’s not much between Toledo and Cincinnati per se and what is there is quite slow,” said Bill Rauch, EV driver.

“This definitely would make it a little bit nerve-wracking to be traveling ya know and making sure that you hit that spot and that they have spots available,” said Nicole Vanbiesbrouck, EV driver.

Stephanie Brinley with S & P Global Mobility tells 7 Action News, the U.S. is in a chicken and egg situation.

Needing to determine how fast to invest in charging station infrastructure, how many chargers get installed, and where they get installed.

While at the same time, there’s not enough demand for EV’s in some areas to make it a worthwhile business model.

“What is happening, both between automakers and between the government and other sources, is people are advancing and developing and putting the infrastructure in place ahead of consumers being ready for it in some areas. And that’s where the difficulty right now comes in,” said Stephanie Brinley, associate director, S & P Global Mobility.

She authored a report which estimates there are 1.9 million EV’s in use today.

That’s only 0.1 percent of the vehicles on the road.

The organization predicts there will be 7.8 million EV’s on the road by 2025.

So how might funding work for new charging stations?

As professor Erik Gordon with the University of Michigan’s Ross School of Business explains, private funding for EV station installation at places like gas stations and truck stops.

“The other possibility is public funding… I think we’ll see a blend of both models. Private and public,” said Gordon.