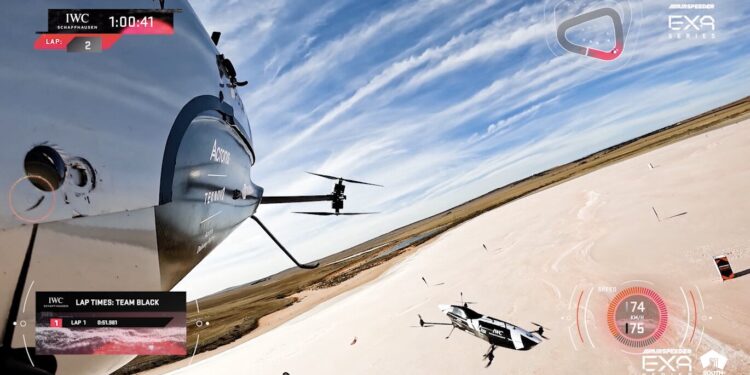 
Starting more than a century ago, racing helped drive the development of early aircraft to the point where they became mainstream mass transportation. Today companies building eVTOLs are taking a similar route.

London-based Alauda, which builds the vehicles, and its Airspeeder racing league unit, which is developing the series and based in Adelaide, say they plan for the races essentially to evolve into an airborne version of Formula 1, with piloted eVTOLs competing on aerial racecourses across the globe.

Pilots Zephatali Walsh and Fabio Tischler flew their vehicles—called speeders—on a 1-km course above the salt flats of Lake Lochiel near Adelaide, South Australia. They used remote piloting stations that gave them views from the cockpit similar to what on-board pilots would see.

The race was run in two sessions with pit stops for swapping batteries. Walsh won the close overall contest despite Tischler recording the fastest lap time of 39.784 seconds and the fastest recorded speed of 102 kilometers per hour or about 55 knots.

The eVTOL racing quadcopters are full-scale and capable of accommodating pilots. They measure 4.1 meters long, are made of carbon fiber and generate up to 320 kilowatts of power which is equal to about 429 horsepower. Each speeder weighs about 287 pounds.

Alauda and Airspeeder say the inaugural race “is just a taste of what is to come from a sport more than four years in the making.”

The remotely piloted races will soon have larger grids of pilots including Bruno Senna, a former Formula 1 and World Endurance Racing driver, the companies say. The EXA Series will serve as a development and feeder program for fully crewed Airspeeder Grand Prix races planned for 2024.