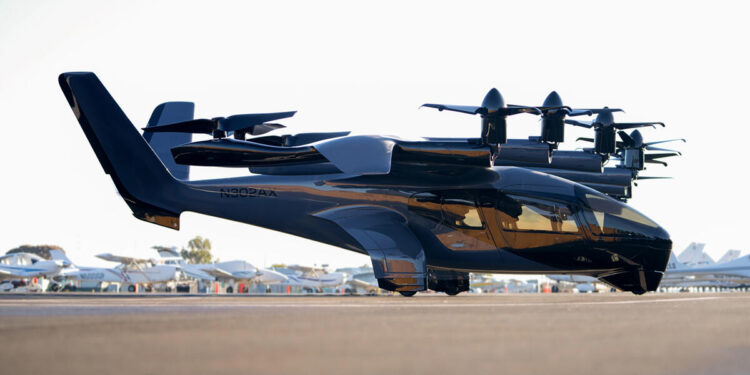 
Car maker Stellantis is to produce Archer Aviation’s four-passenger eVTOL aircraft under a new arrangement announced this week by the existing partners. Stellantis has also agreed to provide Archer with a further $150 million in equity capital in 2023 and 2024 in a move that significantly deepens a relationship with the California-based start-up that began in 2020.

The plans announced on January 4 call for Stellantis to produce the Midnight aircraft at the new manufacturing facility in Covington, Georgia, which is scheduled to open in 2025. The Europe-based automotive group was formed in 2021 from the merger between carmakers Fiat Chrysler and Peugeot.

Archer has said that it plans to initially produce about 650 Midnight aircraft per year. As the new facility expands, Archer says it will eventually be able to deliver as many as 2,300 Midnight aircraft per year. By way of comparison, Airbus and Boeing, the world’s leading airliner manufacturers, each produced around 800 aircraft during the recent peak production year of 2018.

Stellantis, which manufacturers multiple car brands including Citroen, Dodge, Jeep, Maserati, and Vauxhall, could provide the sort of high-volume production capability needed to achieve the significant uptick in output that eVTOL aircraft pioneers say is required to achieve their ambitious goals for transforming the aviation’s cost structure. However, the group has yet to specify how it will implement these techniques in an aircraft production line.

The additional $150 million will be released over the next two years, “subject to achievement of certain business milestones which Archer expects to occur in 2023,” Archer said in a company statement. The partners also said that Stellantis’ increased contribution to the Midnight program will “strengthen [Archer’s] path to commercialization by helping it to avoid hundreds of millions of dollars in spending.”

In September 2021, Archer completed a New York Stock Exchange listing after combining its business with special purpose acquisition company Atlas Crest. Archer reported that it expected to receive net proceeds of around $848 million from a deal valued at $1.1 billion. Stellantis has indicated that it intends to further increase its currently-undisclosed shareholding in Archer, “through future purchases of Archer stock on the open market.”

Midnight is a piloted, fully electric eVTOL aircraft designed to carry four passengers on back-to-back flights of around 20 miles, and the aircraft will be able to recharge in only 10 minutes between each consecutive trip. Although Archer intends to use Midnight for short trips between airports and city centers, the aircraft has a maximum of up to 100 miles on a single charge.

Archer revealed a non-flying mock-up of the Midnight aircraft at a company event in November. Although Midnight has yet to fly, Archer has conducted extensive flight tests over the last year with its two-seat technology demonstrator, called Maker. The company has said that more details of the first operational prototype for the Midnight will be released later in 2023.

Stellantis has been a partner to Archer since 2020 and a major investor in the company since 2021. While initially, Stellantis agreed to provide Archer with access to its global supply chain and production expertise, the goal of the new deal is to have Stellantis become the exclusive contract manufacturer for Midnight.

“We’ve been working closely with Archer for the past two years, and I am continually impressed by their ingenuity and unwavering commitment to deliver,” said Stellantis CEO Carlos Tavares. “Deepening our partnership with Archer as a strategic investor with plans for growing our shareholding demonstrates how Stellantis is pushing the boundaries to provide sustainable freedom of mobility, from the road to the sky.”

Archer co-founder and CEO Adam Goldstein added, “Stellantis’ continued recognition of Archer’s progress toward commercialization, and today’s commitment of significant resources to build the Midnight aircraft with us, places Archer in a strong position to be first to market … Our two companies are taking these important steps together to realize a once-in-a-generation opportunity to redefine urban transportation.”

Tesla stock is now a 'Buy,' according to this firm