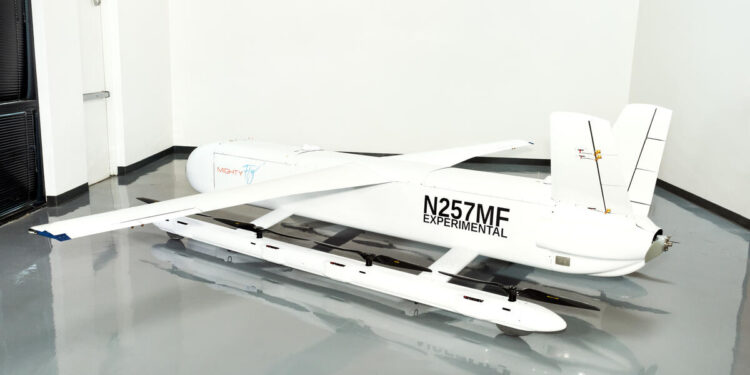 
MightyFly this week unveiled its Cento second-generation autonomous eVTOL freighter aircraft, which incorporates improvements on the earlier MF-100 model, including a new pusher propeller to boost range to 600 miles. The California-based start-up is expanding demonstration flights after the FAA issued a special airworthiness certificate and a certificate of authorization (COA) for the hybrid-electric vehicle, which is expected to carry a 100-pound payload.

Since early 2022, the company has been conducting remotely piloted test flights with the MF-100 under an FAA experimental license. In December 2022, MightyFly began flying the Cento under the terms of the COA, which it says will allow it to demonstrate the critical transition from hover to horizontal flight and conduct flight testing in larger, 230-square-mile airspace and at altitudes of up to 5,000 feet.

The Cento, named after the Italian word for 100, has eight electrical vertical lift fans, each with its own electric motor, and a single pusher propeller for forward propulsion to support speeds of up to 150 mph. The powertrain also consists of an unspecified 30-horsepower internal combustion engine that charges the batteries during flights, avoiding the need for recharging facilities on the ground.

When fully loaded, the high-wing carbon fiber airframe will weigh 355 pounds. On the ground, it will have a footprint smaller than that of two compact cars, which MightyFly says will allow it to operate in multiple locations.

The vehicle’s six-cubic-foot internal cargo bay has space for 96 small U.S. Postal Service packages. The freight can be autonomously loaded and unloaded using an onboard conveyor belt so no human handling other than parcel drop-off and pickups will be required at ground stations.

According to MightyFly co-founder and CEO Manal Habib, the company is now permitted to showcase operational trials in an enlarged airspace in the San Francisco Bay area with a radius of up to eight nm. This will allow it to simulate longer-range delivery operations.

With further FAA approvals possible, it may also be able to conduct flight trials in other specific locations. The company has embarked on a nine-month program of flight tests as it seeks to complete type certification.

Habib told FutureFlight that MightFly’s objective is to develop a more point-to-point model for freight deliveries that she says will be more cost-effective than current hub-and-spoke networks. The company intends to operate the aircraft itself on behalf of commercial clients.

“We have had a lot of interest from medical and pharmaceutical companies, as well as manufacturers who need help with just-in-time production methods, and same-day retail deliveries,” she said. “It is far cheaper than vans that are not fully loaded much of the time, while the Cento will be full or close to fully loaded most of the time.”

The U.S. Air Force recently awarded MightyFly a Small Business Innovation Research grant contract to explore potential defense applications for the Cento. The company intends to start developing a larger version of the vehicle with a 500-pound payload within the next few years.

MightyFly is looking to set up trial programs with prospective customers in the U.S. and other countries, including Australia, Singapore, and Japan. The company, which attracted $5.1 million in seed funding in 2021, says it is now “hiring talent across many functions, including operations, logistics, business, and engineering.”