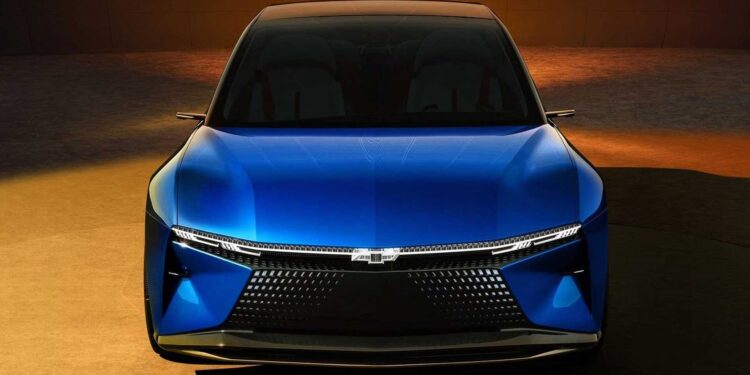 
Last month, Chevrolet unveiled the FNR-XE Concept in China as a preview of a future Ultium-powered electric sedan for the local market.

The vehicle was shown during GM China Tech Day 2022 on November 22 in Shanghai, a special event where the automaker announced plans to launch more than 15 EV by 2025 in the Asian country.

On the occasion, the company only said the FNR-XE Concept “previews Chevrolet’s new generation of electric intelligent connected vehicles custom developed for the Chinese market.” That would suggest other markets will not get it, but there’s still hope, at least for the United States.

The question on everyone’s lips after seeing the sleek-looking FNR-XE study is whether General Motors plans to offer an electric sedan based on it in the US. As it turns out, there is some hope.

Days before the FNR-XE was unveiled, GM President Mark Reuss confirmed during the GM Investor Day presentation on November 17 that Chevrolet is working on a “low-roof” midsize EV with “sedan-like proportions” that would serve as an all-electric replacement for the Malibu in China, where sedans are still in high demand.

According to GM Authority, which first reported on this, Reuss described the vehicle as a “pretty dramatic” D-segment car that’s “really quite a statement from a design standpoint.” He added that the model is in the very early stages of development and has already been confirmed for China.

This leads us to believe he was referring to the production version of the FNR-XE Concept, which fits all of Reuss’s descriptions. Now here’s the cool part. While the Chevrolet electric sedan has only been confirmed for China for now, the executive appeared to leave the door open for US availability.

“This one’s coming a little bit later, and this is a Chevrolet version of it. It’s a ‘Car-D’ primarily for the Chinese market, and we’ll see the desirability as we clinic this,” the executive said at the event about the prospect of US availability.

A replacement for the Chevrolet Malibu is long overdue in the US, with the current model—the brand’s only surviving sedan in its home market—having been on sale since 2016 with a light refresh in 2019.

If GM does give the green light to an electric midsize sedan in North America, it’s unlikely to launch before at least 2025, as the Chinese version will reportedly debut by the end of 2024.

2024 Acura ZDX EV: This Is What It’ll Look Like And Everything Else We Know

Joby Applies for Certification of its eVTOL in Japan