RYSE Aero Technologies Makes History as the First eVTOL Company to Take Flight at CES with their Ultralight Vehicle, the RYSE RECON 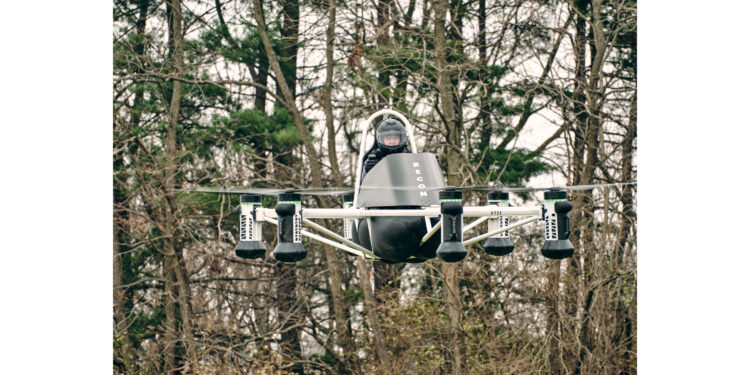 “Being the first aircraft to fly at CES is a big milestone for our company and product,” said Mick Kowitz, CEO of RYSE Aero Technologies. “Demonstrating the world’s first aerial utility vehicle (AUV) that anyone can fly at the most influential tech event in the world is an exciting opportunity for us. We have built this vehicle with the consumer in mind and we think everyone will identify with the RECON immediately.”

Classified under the FAA’s Ultralight rules Part 103, the RECON is an all-electric aerial ATV designed to make flight accessible for all regardless of skill level or pilot’s certification. In the 4 months since the RECON’s first manned flight, RYSE has conducted numerous public flights and demonstrations at top agriculture and farming expos, enabling several enhancements to its capabilities and limitations.

Visitors to both the inside and the outdoor demo booths will have the opportunity to learn about the latest feature enhancements of the RECON including its Simplified Vehicle Operations Systems (SVO), which ensure a low learning curve for the pilot, its Distributed Electric Propulsion (DEP), which increases safety and reliability, as well as its redundant artificial intelligence systems and enhanced battery pack capacity.

“As the world’s largest innovation stage, CES provides an unparalleled opportunity to showcase the RECON’s cutting-edge technology. It’s a fantastic honor to be the first person to fly an eVOTL vehicle here at CES,” said Erik Stephansen, Director of Regulatory Affairs and Aerodynamics for RYSE Aero Technologies. “I’m excited to conduct daily flight demonstrations at the West Hall’s outside demonstration area, giving attendees a chance to see firsthand how easy and intuitive the RECON is to operate.”

To keep up to date on the latest news surrounding RYSE’s entry into CES, please visit www.RYSEAeroTech.com and follow us on social via Instagram, Twitter, & TikTok. Please direct all sale inquiries to our sales department at [email protected] and press opportunities to [email protected].

How to keep EV charging cost down, tips to know