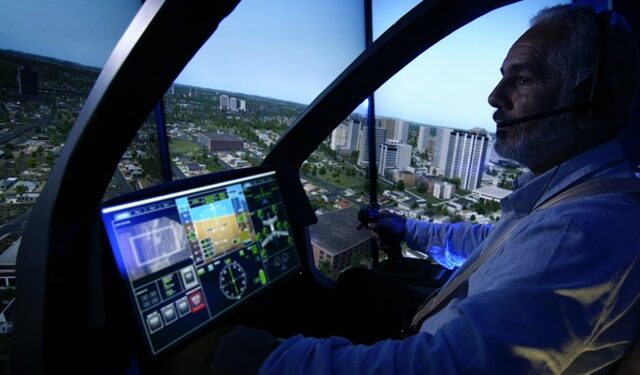 
For electric vertical take-off and landing (eVTOL) aircraft, certification appears to be on the horizon. Many of the leading eVTOL developers expect to certify their aircraft in the next few years. As they continue developing and testing these novel aircraft, they are finalizing the designs and configurations of the vehicles.

Renderings and photos of the exteriors of these eVTOL aircraft are commonly released, but less is known about what goes into the interior—and particularly, what the avionics will look like inside the cockpit of an eVTOL.

eVTOL aircraft designs combine components of both conventional fixed-wing aircraft and helicopters while including some innovative aspects. The transition between forward flight and vertical flight modes, and the use of electric power, mean that the cockpits of eVTOL aircraft will differ from those found in today’s aircraft.

Developers have to consider how to best configure eVTOL cockpits, what training will look like for the operators of these vehicles, and how to effectively display information to the pilot such as flight mode and battery power levels.

Joby’s eVTOL “uses a unified flight control system, which is based on 30 years of research that resulted in the cockpit architecture of the F-35B, to combine vertical and cruise flight into the same control interface,” shared Greg Bowles, Head of Government and Regulatory Affairs at Joby. He noted that their aircraft’s development builds upon lessons learned from early vertical take-off and landing (VTOL) aircraft, like the Harrier jet.

One of the priorities at Joby is designing the pilot experience to feature a significantly lower workload compared to traditional aircraft. This has been a key focus from the early phases of design, said Bowles.

The design of the aircraft’s cockpit, and in particular the unified flight controls, are intended to facilitate the transition for pilots familiar with flying conventional airplanes or helicopters. Bowles confirms that most of the avionics and displays will be familiar to certified pilots.

“At the core of designing the Joby flight control system and the cockpit, we have focused on ensuring the pilots can focus more attention on higher-level decision making,” he added. “We continue to conduct lots of human factors testing with a diverse group of pilots.”

By making the flight controls easier to manage than those of traditional helicopters, pilots of Joby’s eVTOL will be able to focus on maintaining safety while in flight.

Joby revealed in 2021 that they have chosen Garmin’s G3000 flight deck to integrate into their eVTOL. According to Bowles, the G3000 “delivers enhanced capabilities to optimize air mobility service through tight integration with the vehicle mission computer and tailoring of flight guidance display indications.”

Joby has partnered with Garmin to integrate information specific to their eVTOL “into a display interface that traditional pilots will find familiar and easy to navigate,” Bowles shared.

As the company progresses through the development phase, Joby has gathered feedback from military pilots on its initial pilot training materials as part of the company’s partnership with the U.S. Air Force’s Agility Prime program.

Another leading eVTOL developer, Archer Aviation, revealed the name of its “Midnight” production aircraft in August. Archer has conducted flight testing and development with its testbed model, called Maker.

The Midnight eVTOL will use a flight control strategy that is similar to the F-35’s unified controls, a representative from Archer told Avionics in an emailed statement. “From the pilot’s perspective, the control inputs will be the same whether in a hover or in forward flight,” shared Archer’s spokesperson.

The company’s priorities for designing the cockpit of its eVTOL include certification, safety, and a cohesive design in line with the rest of the cabin. The representative noted that the aircraft’s design also addresses the challenges inherent in creating an aircraft for environments that require fixed-wing conventional take-offs and landings as well as VTOL capabilities.

The physical layout of the flight deck, the controls, and the displays featured in Archer’s eVTOL will be similar to today’s aircraft, according to the representative. “Flight and navigation instruments will also be similar,” they added. “However, due to the use of batteries for powering flight, the traditional engine type instruments and limitations will be different from today’s in-service aircraft.”

Archer’s Chief Pilot and the Human Factors Engineering Lead have been involved in the design of not only the flight deck and cabin layout but also the display and controls. “[They] work with designers, systems engineers, and systems safety engineers to identify appropriate alerts and controls and to design the display pages for systems as they are required,” Archer’s representative stated.

Size and weight are two of the most important factors that Archer considers in choosing suppliers for the displays and controls in Midnight. Human factors also played a part in the layout of equipment within the flight deck to optimize readability of information and reach of controls.

German eVTOL developer Lilium has utilized Honeywell’s expertise in flight control systems for developing the Lilium Jet. In addition to providing the flight control system for Lilium’s eVTOL, “Honeywell will deliver our next generation integrated avionics system, which will provide a simplified user interface for the pilot to fly the Lilium Jet,” a spokesperson from Lilium shared with Avionics.

Lilium’s spokesperson commented, “From a pilots’ perspective, the significant development effort put into our cockpit design means it will provide the best possible field of view for the pilot in a practical, ergonomically designed cockpit that utilizes modern, integrated displays and controls—all of which are optimized for single pilot operations.”

Jia Xu, CTO and Sr. Director of Engineering and AAM at Honeywell Aerospace, remarked in an interview with Avionics that fly-by-wire systems are essential for enabling pilots to effectively control eVTOL aircraft throughout different flight modes. One eVTOL can have 20 or more different actuators and rotors, and there’s not an easy way to connect those controls in a way that would work throughout the flight envelope, he explained.

Xu also mentioned the importance of facilitating consistent human-machine interfacing between the pilot and the flight controls. “We don’t want to radically change the way that forward and lateral motion is controlled the moment you switch from hover to transition forward flight,” he said. Otherwise, switching modes in an inconsistent manner could disorient or distract the pilot.

“Even for a highly trained pilot, there are just way too many rotors, motors, and actuators to be able to manage everything, especially throughout all phases of the flight,” commented Sapan Shah, Senior Product Manager of AAM at Honeywell.

Jia Xu noted that the physical cockpit of an eVTOL aircraft will be somewhat different than that of a conventional aircraft or helicopter. “It’s a single-pilot cockpit by default, and it’s very compact,” he said. “Space is at a premium, so the avionics panel has to fit in a very defined area.”

Xu also stressed the importance of customizable avionics for eVTOLs. The eVTOL industry is going to evolve at a faster rate—particularly in terms of automation and regulations. The avionics systems will need to be able to accommodate novel functions and different customer needs.

The avionics that go into eVTOLs need to be able to host the next generation of capabilities as the industry transitions into simplified operations and eventually autonomous operations.

An eVTOL aircraft’s human-machine interface must feature a touchscreen, according to Xu. “You need to minimize the amount of real estate taken up by physical buttons. With a touch-based system, there’s a software-defined interface, and you can fit more capabilities into a fixed space.”

A Thales official told Avionics in a written statement that the company “has developed a new generation of fly-by-wire solutions for Advanced Air Mobility with a true high-integrity computer providing the most compact and simplified architecture on the market facilitating certification.”

According to the written statement from Thales, the features of eVTOLs that will differ most from today’s fixed-wing aircraft and helicopters are a compact design, light overall weight, and cost efficiency. Because eVTOL aircraft will be operated by a single pilot, pilot assistance solutions and seamless connectivity to enable communications are even more important.