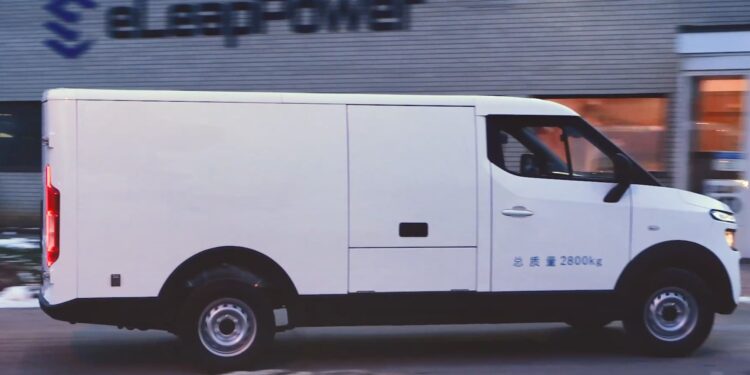 Slow charging speed is a major buzzkill for electric vehicles. But what if we told you a big, heavy, expensive piece of electronics was partly to blame for slowing your EV’s charging rate, and that a Canadian tech startup figured out an extremely simple solution that allows an EV to charge faster and operate more efficiently by ditching that pokey onboard charger? That’s exactly what eLeap Power is proposing with its integrated inverter technology.

Your battery stores DC power, but your EV motor requires AC power to accelerate or regeneratively decelerate, and your level-1 or -2 EV charger dispenses AC electricity. It’s the inverter’s job to convert between the two, using transistor switches that periodically reverse the direct current polarity to send sine waves of current to the motor or rectify the sine waves into solid plus-or-minus polarity.

An onboard charger happens to include much of the same equipment as an inverter, essentially acting like an inverter that’s receiving a constant stream of “regenerative braking” energy and converting it to DC power for the battery. There are obvious downsides. These onboard chargers currently in market are about the size and weight of a backpack filled with sand, and they’re only designed to accept a set amount of energy, so it might take overnight to recharge a battery. The latest EVs that are capable of higher 800-volt charging may also require a voltage converter to step up or down between 400 and 800 volt charging—that’s yet another big hunk of power electronics to add to the equation. So what’s the solution?

Integrated Inverter Does It All

Enter eLeap Power, leveraging research conducted at the University of Toronto, which appears to be the the first to have figured out how to do what engineers have long believed should be technically feasible: To utilize the EV’s electric motor’s windings in conjunction with the existing inverter to then also function as an onboard charger, thus reducing the amount of equipment required.

They do this by splitting the inverter in half—with each division charging a half of the battery pack. The electric motor’s stator coil is also wired between the inverter’s split electronics. This allows the new integrated inverter to utilize the existing inductance of the motor stator’s copper wire windings, which serves as a de facto limit to the charging power. That would mean a 200-kW motor can charge at a rate of 200 kW.

So for example, replacing the 6.6-kW onboard charger from a Nissan Leaf with an eLeap Power Integrated Inverter would allow the car to accept the maximum rate currently possible from the North American Level-2 infrastructure, which is 19.2 kW (80 amps at 240 volts), thus improving the Leaf’s charging time by a significant margin. As a bonus, the Integrated Inverter is inherently bi-directional as well, so it supports vehicle-to-grid or -home power sharing from the EV battery’s stored energy.

The guts of the Integrated Inverter are not materially different from those in today’s inverters, so any net difference in supply or material cost and weight there will be negligible. Obviously all of the cost and weight of an onboard charger and (where necessary) the 400-800-volt converter plus their associated wiring are simply lined out of the bill of materials. Removing the assembly stations for these parts realizes a further manufacturing cost savings. In all, eLeap Power reckons the total power electronics cost of an electric vehicle could be halved.

Better for the Motor, Battery

We fretted that leveraging the motor windings for double duty like this might risk “wearing them out” quicker, but no, we were reassured, the split inverter can result in smaller voltage switching with gentler changes in voltage experienced by the motor. And the highest power DC fast charging might actually be slightly better for the battery when running the incoming power through this Integrated Inverter, because that allows the battery monitoring system (BMS) to keep tabs on individual cell voltages during charging, potentially spotting trouble that would have been missed were power was instead routed directly into the battery via a voltage converter (which the eLeap system also eliminates).

Wiring the motors in tandem with the inverter like this can allow the vehicle to regenerate energy down to lower speeds than is possible with today’s separate inverter setup. eLeap Power claims this can boost EPA city-cycle energy efficiency by 12 percent.

This potential energy savings earned eLeap Power a $3 million award from Bill Gates, because that organization reckoned the technology could save 0.6 gigatons of CO2 by 2040.

Fleets with access to onsite wind, solar, or other green energy source often have a local microgrid, perhaps with on-site battery storage, and these microgrids generally store DC energy. The eLeap Power Integrated Inverter can directly charge the battery from such microgrids, greening the fleet just that tiny bit more by eliminating losses that might come from converting that energy to feed the main grid, and then converting it again via a charger.

Thanks to several successful funding rounds, the product is fully developed. China’s Chery Automobile Co. Ltd has signed a contract to outfit 15,000 of its delivery vans with the eLeap Power Integrated Inverter starting this year, produced by Chinese Tier I supplier Hasco.

Bloise : TRONITY powers customers to get the most out of their electric vehicles