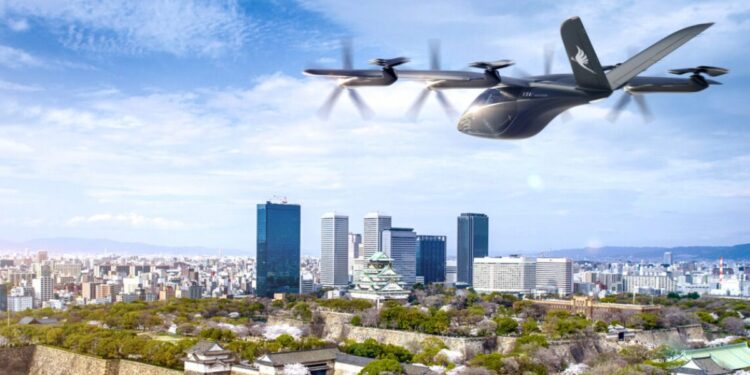 
UK advanced air mobility (AAM) company Vertical Aerospace says it has secured pre-payment for 25 of its VX4 electric takeoff and landing (eVTOL) planes from Japanese conglomerate Marubeni Corporation, which also reserved delivery of the craft when expected production begins somewhere toward the middle of the decade.

Vertical said the pre-payment and reservation accord on the 25 eVTOL planes was part of a larger deal it had concluded with Marubeni involving an option to buy up to 200 of the AAM craft. The transaction was an extension of the partnership the two companies initiated in September 2021, when they began research on and preparing for the various regulatory and operational aspects likely to be involved in next-generation aircraft transportation in Japan.

The deepening of their relationship leaves Vertical in an advantageous position to supply Marubeni the eVTOL fleet it will need to operate AAM services in Japan, which it is preparing to roll out through its Marubeni Aerospace unit.

The company has already undertaken simulated air taxi flights using helicopters in the Osaka area as both proof-of-concept testing, and demonstrations to prepare the public for the nearing introduction of next-generation aerial operations.

The prepayment and reservation of its initial Vertical eVTOL planes brings Marubeni that much closer to launching AAM services later in the decade.

“We are proud to have taken another major step with Vertical Aerospace to introduce VX4 in Japan,” said Satoshi Takechi, general manager of Marubeni’s aviation, space and defense department. “I am confident that our continued joint efforts with Vertical Aerospace, such as evaluating the requirements for eVTOL operations and engaging the potential partners under the Joint Working Group, together with this new agreement, will accelerate the development of the AAM market in Japan.”

Marubeni and Vertical are among the many companies readying Japan for AAM activity, and planning to showcase the new mode of transportation at the Osaka World Expo 2025. Among the other cutting-edge, non-polluting tech to be featured there are demonstration eVTOL aircraft, and – should progress on certification, operational tech, and regulation allow ­– possibly introduction of limited air taxi flights.

Japan is expected to be an early adopter of and potentially huge market for AAM aircraft services, and Vertical CEO Stephen Fitzpatrick is intent on making his company a key player in that activity.

“We are delighted to have reached the next milestone in our partnership with Marubeni,” he said. “Japan is a wonderful country which is embracing the promise of eVTOL, as it will connect cities and regions like never before. We look forward to our joint efforts to build the ecosystem for zero-emissions travel in Japan.”