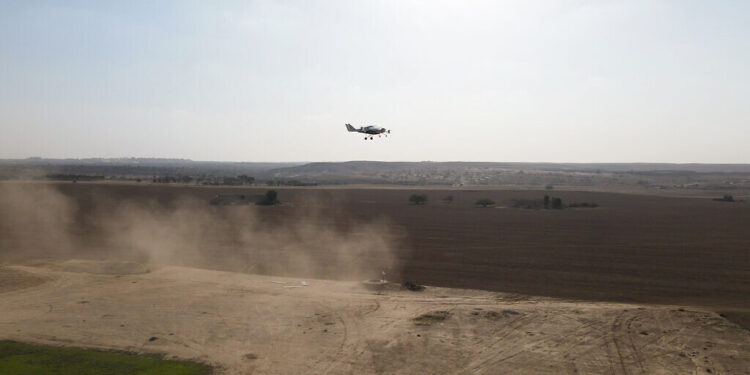 
An Israeli startup that is developing an electric flying vehicle for consumers said a prototype aircraft successfully completed its first unmanned cruise flight, which the company says puts it on a path for the rollout of manned aircraft in the next two years.

The Pardes Hanna-based startup, called AIR, said it is on track to deliver the first batch of its electric vertical takeoff and landing (eVTOL) aircraft by the end of 2024 after this week’s transition from hovering test flights to the horizontal cruise tests, which were conducted near Beersheba under the supervision of the Civil Aviation Authority.

The startup’s AIR ONE is an all-electric two-seater eVTOL with a range of 110 miles (177 km) on a single charge at speeds of up to 155 miles (250 kilometers) per hour, at an altitude of 1,200 feet and a flight time of one hour. The aircraft, which already has an airworthiness certificate, has collapsible wings for easy parking and can take off from or land on any flat surface. It is tailored for personal use and seeks to offer an everyday alternative for short distance commuting in the sky.

“It is thrilling to have reached this moment in our journey as we strive to build the foundation to make personal air mobility a reality,” said AIR CEO and co-founder Rani Plaut.

Speaking with The Times of Israel, Plaut said the startup has already received 273 pre-orders for its AIR ONE, out of which 240 were from US-based customers. They’re priced at $150,000, similar to a luxury car.

Looking ahead, Plaut expects a batch of 150 to 200 aircraft to be sold with the market rollout in 2024. The vision is to sell over 1,000 aircraft within two years, and then getting to 5,000 units or more per year, Plaut added.

“We have to prove safety before flying people,” said Plaut. “We expect the manned prototype for mass production itself to start flying at the beginning of 2024 and it should finish the certification and be ready for deliveries by the end of 2024.”

For the cruise flight test conducted on Dec. 18, the AIR ONE prototype was loaded to its full capacity of 1,100 kilograms (2,425 lbs), consisting of the 945-kilogram aircraft and a 150-kilogram payload simulating the weight of passengers.

“The final product will have the same total weight, but the aircraft will be a little lighter and will be able to carry 250 kilograms, including people and luggage,” Plaut remarked.

The startup said that the milestone cruise flight test kicked off thousands of flight hours planned for the AIR ONE as part of its US Federal Aviation Authority (FAA) process to obtain G1 certification, which outlines initial safety and environmental standards for civil commercial operations.

“At  this point, we fly only up to 300 feet and not more than 15 minutes,” Plaut noted. “In the next flight campaign, we hope to get to the maximum performance, which is an hour of cruise.”

Plaut said that AIR’s customers range in age from 35 to 75 with 40% holding a pilot’s license.

“Some need it for professional applications — doctors, for example who need to go from patient to patient on islands,” said Plaut. “We have people who currently go to work in Florida in a helicopter and would like to go green, and we also have people in Texas who want it to play with on the ranch.”

AIR (formerly Porality Mobility), was first conceived in 2017 by Chen Rosen, an aviation expert, who was later joined by serial entrepreneurs Plaut and Netanel Goldberg. Since inception the startup has raised just under $20 million in funds and is currently in the process of raising $15 million via an A round of financing, which is expected to close in the first quarter of 2023.

We’re really pleased that you’ve read X Times of Israel articles in the past month.

That’s why we started the Times of Israel ten years ago – to provide discerning readers like you with must-read coverage of Israel and the Jewish world.

So now we have a request. Unlike other news outlets, we haven’t put up a paywall. But as the journalism we do is costly, we invite readers for whom The Times of Israel has become important to help support our work by joining The Times of Israel Community.

For as little as $6 a month you can help support our quality journalism while enjoying The Times of Israel AD-FREE, as well as accessing exclusive content available only to Times of Israel Community members.

Thank you,
David Horovitz, Founding Editor of The Times of Israel