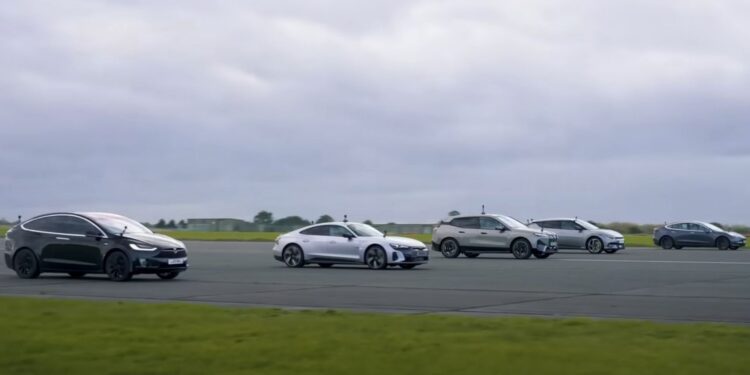 
Many car enthusiasts are still crying over the fact that all-electric vehicles are taking over the automotive world. However, the carmakers are ensuring they don’t miss out on the fun factor and thrill of driving entirely. All-electric cars like Audi RS e-Tron GT are now carrying forward the legacy of their predecessors with IC engines (the Audi RS 7 Sportback, in this case).

The Audi RS e-Tron GT is not the lone warrior to take the game of performance among cars further, as many other fast electric vehicles are now on sale globally. Some names like Tesla Model X Performance, Tesla Model 3 Performance, Kia EV6 GT, and BMW iX M60 have carved a niche among driving enthusiasts, especially those from the newest generation.

Related: Why The 2022 Audi RS E-Tron GT Is The Most Beautiful Luxury EV

The Audi RS E-Tron Takes On The Bigwigs

The other two cars – a grand tourer and an SUV – are the two most modern offerings in this comparison, the Kia EV6 GT and BMW iX M60. With a dual motor setup that claims 585 hp and 545.8 lb-ft, the Kia EV6 GT offers the best performance-to-price package in this test. On the other hand, the BMW iX M60’s dual motor setup produces 619 hp and 811.3 lb-ft. The iX M60 is also the heaviest and priciest vehicle in this comparison.

The Drag Race Results – How The Audi RS E-Tron GT Emerges As A Winner?

All the cars – Audi RS e-Tron GT, Tesla Model 3 Performance, Model X Performance, Kia EV6 GT, and BMW iX M60 – line up for the quarter-mile drag race. In round 1, all the cars, save for the BMW iX M60, have a flying start, with the iX’s driver having a slow launch. The BMW iX ended up as the tail-ender in this drag race. However, the Audi RS e-Tron GT maintained a clear lead over all the other four cars right from the start. The Tesla Model 3 Performance and Kia EV6 GT can be seen engaged in a neck-to-neck battle in the drag race, with the latter ending up as the second better car in this drag race after the e-Tron GT. The Tesla Model X Performance finished as the fourth car in the drag race.

All five EVs assemble once again for the drag race, intending to have a perfect launch. It is the main round of the drag race, the results of which were meant to be final and considerable. However, even in this drag race round, the RS e-Tron GT emerges as a clear winner with an 11.3 second for covering the quarter mile. It maintained a clear lead over others, followed by Model 3 Performance in the second position (11.7 seconds) and EV6 GT in the third (11.8 seconds). This time, the BMW iX M60 had a perfect start, due to which it drove ahead of the Model X Performance. While the iX M40 secured a fourth position (12 seconds), the Model X Performance was the tail-ender in this round (12.5 seconds).

Pure aerodynamics was the reason that assisted the Audi RS e-Tron GT in this drag race. It was not have the most powerful powertrain setup of the lot. But the fact that it sits closest to the ground in this test helped the RS e-Tron GT a lot. Adding to it, the streamlined bonnet, angular windscreen, sleek fascia, and smooth side profile are some other reasons which contributed to the easy victory of the e-Tron GT.

While the BMW iX M60 and Tesla Model X Performance look heavyweights on paper, the much more affordable Tesla Model 3 Performance and Kia EV6 GT were the real deal in this real-world test. The lower curb weights and comparatively more aerodynamic shapes of these two cars helped them have commendable power-to-weight ratios, thus helping them attain quicker acceleration figures than the much-powerful iX M60 and Model X Performance.