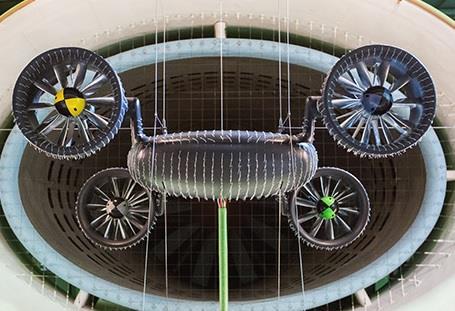 
Russia’s Central Aerohydrodynamic Institute has been supporting development of a tiltrotor eVTOL through windtunnel testing.

The Bartini Design proposal has four 10-bladed rotary fans – two fore and two aft – and is intended to convey two to four passengers at speeds up to 160kt, and have a range of 80nm.

According to the Moscow-based institute, the model has undergone testing with running and idle engines, and with isolated propellers.

“Specialists of the institute determined the aerodynamic characteristics of the model during take-off and landing, cruise and transitional flight modes,” it states. Surface-flow visualisation was also performed.

The aircraft is designed to operate at altitudes up to 10,000ft.

Further tests on the aircraft are scheduled to take place in spring, the institute says, aimed at improving the aerodynamics.

“Ability to quickly move over short distances within and between cities is of particular relevance today,” it adds. “This means there is a growing need to create small aircraft that perform such functions.”

Queensland’s Progress Towards A 100% EV Fleet