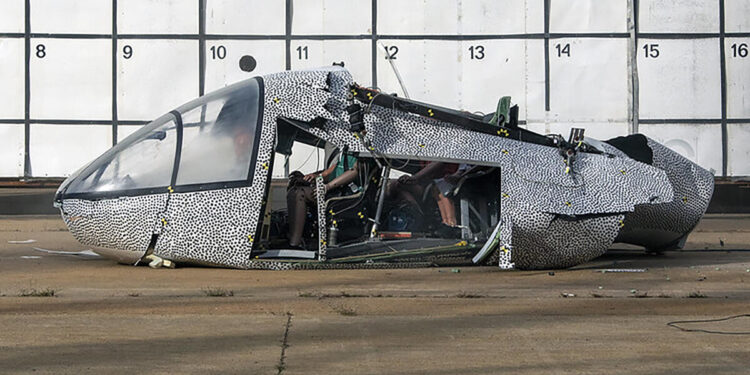 
As part of its ongoing efforts to study the safety of new advanced air mobility technology, NASA recently smashed a mockup eVTOL aircraft cabin full of crash-test dummies into the ground to find out what might happen to the occupants in the event of an emergency landing. The agency released a video showing several views of the test article crashing into the ground in slow motion as its overhead structure collapses.

NASA conducted the full-scale crash at the Landing and Impact Research facility at NASA’s Langley Research Center in Hampton, Virginia. The aircraft cabin was a test article developed by NASA’s Revolutionary Vertical Lift Technology project, which researches and invests in the technologies that will enable the introduction of new aerial vehicles associated with advanced air mobility, such as eVTOL aircraft that can carry passengers or cargo in areas currently underserved by aviation.

For the crash test, NASA loaded six anthropomorphic test devices—colloquially referred to as “crash test dummies”—into an eVTOL cabin with no wing or propellers attached. However, an overhead mass was added to represent the wing structure, rotor, and battery. The researchers used dummies of various sizes to study how a crash might impact occupants of different ages. During the experiment, NASA also tested new energy-absorbing stroking seats as well as an energy-absorbing composite subfloor developed by the agency.

“When looking at crash conditions for these types of vehicles, it’s important to note the structural weight and distribution that must be made when examining a specific design,” said Justin Littell, a research assistant for NASA Langley’s Structural Dynamics Branch.

The researchers hoisted the fully occupied cabin several meters into the air, released its supporting cables with pyrotechnic cutters, and swung it into the ground at an angle, emulating the way an eVTOL aircraft might crash in the event of a loss of propulsion or other emergencies. Although the cabin appears to have been badly damaged in the crash, NASA has deemed it a successful experiment.

“The test was a great success for the crash-worthiness team at Langley,” Littell said. “We successfully tested the eVTOL vehicle concept representing a six-passenger, high wing, overhead mass, multiple rotor vehicle, obtaining more than 200 channels of data, and collecting over 20 onboard and off-board camera views.”

“While we are still going through the data and video, and these results are preliminary, we see that there are two main events that occurred during this test,” Littell added. The first event, NASA explained, was the crushing of the floor and seat stroking. According to NASA, the energy-absorbing seats and floors appear to have functioned as expected, reducing the impact on the crash-test dummies.

The second event to which Littell was referring was the collapse of the overhead structure shortly after the impact. While the dummy passengers in the front of the aircraft don’t appear to have been crushed by the airframe, the situation in the back seat doesn’t look as promising. “The effect of the overhead structure collapse on the crash test dummies is still being determined,” NASA said in a statement.

“Our computational pretest models did a good job predicting the composite deformation until overhead structural failure,” Littell said. “However, the computational models did not predict the overall collapse as seen in the test.”

NASA says data from this crash test will help to improve these simulations to make them more accurate and realistic. Researchers also plan to use the data to help devise the agency’s next eVTOL drop test, scheduled to take place in late 2023.