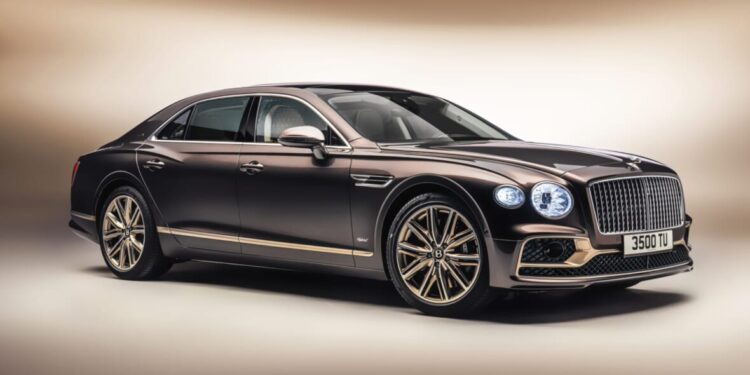 
The ultra-luxe British marque is cruising into an all-electric future.

Full electrification is in Bentley’s imminent future. The luxury British marque and world’s largest producer of 12-cylinder engines aims to be an all-electric brand by 2030, with the first Bentley EV set for a 2025 arrival. In the meantime, the crew in Crewe is taking a small step into its electrified future with their first Flying Spur Hybrid.

On first inspection, it’s difficult to tell this Flying Spur is anything out of the norm for Bentley’s lineup. The lines of the body are gorgeous and elegant, the car feels heavy and well-built. As a passenger, the ultra-luxe interior remains quintessentially Bentley in its opulent offerings: massaging seats, rear touchscreen controls and incredible materials to wrap occupants in thoughtful comfort.

The Odyssean Edition test driven for this article does include some exterior understatements like natural hues to the paintwork and trim that’s painted instead of chromed. These subtle touches are especially notable when compared to Bentley’s normally bolder offerings like the Bentayga, Continental and especially the unique Batur.

Getting behind the driver’s seat is where the difference of the hybrid comes into full view. The hybrid engine works in several ways, each manually chosen by the driver. There’s a true hybrid mode, in which the electric motor supports the combustion engine to deliver better gas efficiency and almost 500 miles to the tank; a full-electric mode that’s entirely dependent on the electric motors and shuts off the combustion engine; and a completely non-electric (aka Sport) mode, in which the car relies solely on the gas engine and actively recharges the electric battery.

My experience in the hybrid mode—the mode I imagine most people who buy this car will favor—went beyond my expectations in terms of efficiency for a Bentley. Taking the car on a road trip from NYC, I watched as miles per gallon increased noticeably when switching over to hybrid mode. One downside to the efficiency is that this V6 feels underpowered and on the sluggish side off the line when moving the sedan’s heft.

Switching over to Sport and turning off the electric motor mitigated this issue. Not a surprising outcome because this change functionally turns the Flying Spur Hybrid into a regular Flying Spur. The engine growled pleasantly on the switch and the familiar acceleration returned though, again, this is still a V6 car and that’s a far cry from the performance of Bentley’s signature W12 engine.

Perhaps the most interesting mode in the Flying Spur Hybrid—definitely the one I was most excited to experience—was full electric. Keeping in mind the fact that Bentley still has a long way to go in their transition to full electrification in 2030, I was focused on the prospect of seeing what they’d already accomplished and how much they’d leveraged from their parent company, Volkswagen, who have already realized some of their electric ambitions in the ID4 and the VW Buzz van.

Sadly, for Bentley, this was a let down and the road to EVs currently feels longer than I expected. The Flying Spur’s full electric range was a paltry 30 miles and speed caps out at 87 mph (compared to 177 mph when using gas.) I was told these specs before getting in the driver seat but I just wasn’t ready for how limiting they felt. Even in a local setting, 30 miles is a range I’d expect from an electric scooter, not a super-lux car. Driving hard in the aggressive stop-and-go traffic of NYC knocked it down even more.

Did the Flying Spur Hybrid still perform admirably in these conditions? Of course it did…just not for long before I had to flip back to Sport mode to start juicing up the electric motors. Was I pleased that EV-mode limited top speed to 87 mph when I finally broke free of NYC traffic and hit the highways, allowing Priuses and Teslas to pass me? Hell no.

On the brighter side, regardless of which mode I was in, the Flying Spur handled beautifully and was a pleasure to drive, especially for such a large car. Steering was tight and suspension was stiff enough to not feel like a boat. Even the night vision HUD came in handy as I tightly wound around the twists and turns of upstate NY’s mountains after dark. Bentley undoubtedly knows how to make cars that are engaging to drive and that pedigree is certainly coming through, even as they find their footing with hybrids and EVs.

Perhaps that’s why I found this watered down approach to hybridization off-putting. Bentley puts their century-long expertise into every element of their cars. I’ve seen how they do it and it’s honestly breathtaking. So it’s shocking to see them come off as amateurish in, well, anything. For the English car maker, this uncharacteristically timid approach to the brave new world of electrification just doesn’t reconcile with everything else they do.

For now, I’ll remain hopeful for Bentley’s EV future. I’ll keep in mind that Bentley’s factory overhaul to facilitate EV production is still being constructed. I’ll remember that, even though 2025 will be here in a blink, Bentley announced their first EV will be “sporty” and not a 17-foot-long Flying Spur sedan that’s uncompromising in its luxury. I’ll tell myself that, at $271,000, the Flying Spur Hybrid will probably make a wonderful addition to someone’s Bentley collection, seeing as it’s the first of its kind and growing pains in the auto world are historically fascinating.

Oddly, after this outing in the Flying Spur Hybrid, my expectations might be even higher for what’s next. In fact, the moment I get the chance to drive another Bentley Hybrid or EV I’ll jump at it, because I know that this is just the first small step for a company that doesn’t miss often, and their commitment to electric is all-encompassing. The best is surely yet to come and I cannot wait to see it.

10 Countries with the Largest Nickel Reserves in the World